The second phase of Red Clydeside took place just after the war ended. There were more strikes and conflict between workers and police, causing the government to worry that the strike leaders were preparing to start a revolution in Britain.

After the war, industrial workers across Britain began to fear for their jobs. They realised that the war had given a temporary boost to industries which had been facing problems before the war. As munitions factories closed, industrial workers also faced competition for jobs from thousands of returning soldiers.

On Clydeside, the CWC was leading a campaign to reduce the working week from 54 hours to 40 hours, partly to help create jobs for soldiers returning from the war. 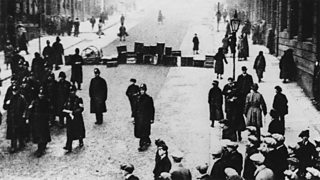 People fighting in the Battle of George Square

In January 1919, at a meeting of shop stewards in the shipbuilding and engineering industries, the CWC established the Forty Hours Movement. They then called a strike and held a large demonstration in George Square in Glasgow on Friday, 31 January 1919. According to contemporary reports, the crowd grew to 25, 000 people. The authorities became concerned and clashes broke out between the police and protesters.

The police launched a baton charge into the crowd, injuring 36 people, afterwhich running battles spread across central Glasgow. The government had been advised that the crowd could easily become a revolutionary mob and concern increased when reports said a red flag had been seen in the crowd.

On the request of the Sheriff of Lanarkshire, 10,000 troops, largely from Scottish regiments, were mobilised to restore order and to ensure power supplies and the city in general kept running. Six tanks were also transported to Glasgow and made available for use and machine gun posts were set up in the city, this military presence lasted for around 2 weeks.

Within a week of the Battle of George Square (dubbed 'Bloody Friday'), the strike was over and a settlement was reached on the basis of a 47 hour working week. This was a victory for the workers in the short term but it did not seriously challenge the role of the bosses.