The Nazis introduced policies to control religion, German youth and to promote and encourage the idea of a superior Aryan race. Through indoctrination they were able to keep control of, and influence the thinking of German citizens. 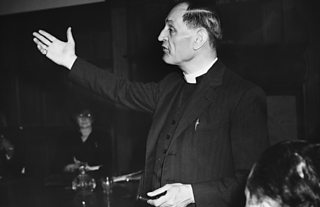 This agreement between the Nazis and the Pope stated that the Catholic Church in Germany would be protected. In return the Church would stay out of political matters and not criticise the Nazis.

Despite signing an agreement with the Pope, the Catholic Youth League was broken up, Catholic priests arrested and religious teaching banned.

Hitler set up a ‘German Christian Church’ with Nazi bishops. Ministers, such as Martin Niemoller, who resisted by setting up the Confessional Church, were sent to concentration camps. 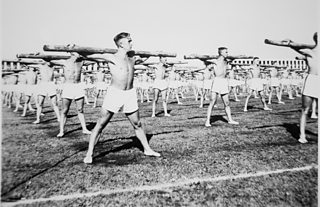 The Nazis tried to brain-wash the German population into believing in the Nazi way of life. They believed that the best way to do this was by changing the minds of the young so they would grow up to become Nazi supporters.

Education was controlled by the state. Nazi education was aimed at developing young adults who believed fully in Nazi ideals.

School subjects were given a pro-Nazi bias. For example, history was taught to glorify Germany and biology instructed that pure Germans were superior. There was a strong emphasis on militarism in subjects such as maths, where problems would be presented in terms of the army or war.

Nazi Youth Groups were introduced to help control German youth outside of school and to prepare them for life in the Third Reich:

The Nazis believed that Nordic and Germanic people belonged to a superior race of human, the Aryans. They wanted to increase the Aryan birth rate. They also wanted to remove ‘racial pollution’

To encourage the growth of the Aryan race, the Nazis saw the role of women as wives and mothers.

Women were expected to stay at home and look after the family. Women doctors, teachers and civil servants were forced to give up their careers.

The Law for the Encouragement of Marriage gave newlywed couples a loan of 1,000 marks, and allowed them to keep 250 marks for each child they had. Mothers who had more than eight children were given a gold medal. Unmarried women could volunteer to have a baby for an Aryan member of the SS.

Persecution of Jews and other groups

The Nazis believed that only Germans could be citizens and that non-Germans should not have any claim to the rights of citizenship. The Nazi racial philosophy taught that some races were ‘untermensch’ (German for ‘sub-human’).

Many scientists at this time believed that people with disabilities or social problems were genetically less human and that their genes needed to be eliminated from the human gene-pool.

The Nazis carried out a number of actions as result of these beliefs:

Nazis persecution of Jews increased during this period.

Jews were removed from public office and professions – civil servants, lawyers and teachers were sacked. School lessons reflected the view that Jews were ‘‘untermenschen’. 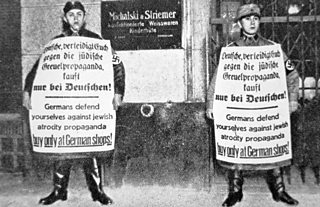 Nazi soldiers outside a Jewish shop during the 1933 April Boycott

On the 1st April, a boycott of Jewish shops and other businesses took place. SA officers actively discouraged Germans from entering Jewish places of work. Many Jewish shops were vandalised.

The Nuremberg Laws were introduced at the Nuremberg Rally on 15th September. They removed many rights from Jewish people. 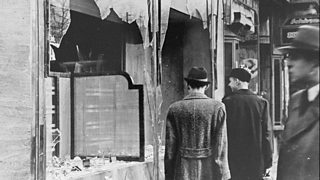 Smashed windows in the aftermath of Kristallnacht

On the night of the 9th November, Jewish homes, businesses and synagogues were attacked throughout Germany and Austria. Around 7,500 Jewish shops were damaged or destroyed. 400 synagogues were burned to the ground.

Just under 100 Jews were killed and 30,000 were sent to concentration camps.

The Jewish community itself was forced to pay a fine of one billion marks to pay for the damage and afterwards had to clear the streets of all the broken glass.

Jews were banned from owning businesses.

The first ghettoes (segregated housing within towns, with controlled entrance and exit) were opened in Eastern Europe to separate Jews from ‘ordinary’ citizens. 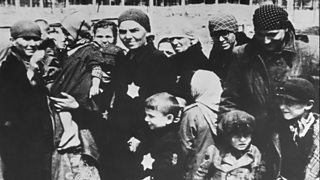 Jews were forced to wear a ‘Yellow Star’

On 23 November, 1939 Jews were ordered to wear the Star of David on their clothes. This helped identify them more easily.

The Nazis' persecution of the Jews meant that many other Germans lived in fear of the Nazis turning on them.

This severely reduced the number of people who were willing to openly oppose the Nazis.

Moreover, in some circles, the Nazis were commended for such action and their support increased.