The Nazis tried to make Germany self-sufficient - that is, to produce all the goods it needed without having to rely on external supplies. This was called Autarky.

The Nazis implemented a major programme of public works, such as building and repairing roads, railways and houses. This significantly helped reduce unemployment, as did large-scale military rearmament.

With Germany building up its armed forces, thousands of jobs in iron, steel, aviation and shipbuilding were created.

After 1935, conscription of men into the army also helped reduce the unemployment figures. This was seen as a benefit to the country and enabled many Germans to accept Nazi rule.

The German Labour Service made it compulsory for young men to be employed in public works schemes for 6 month stints. 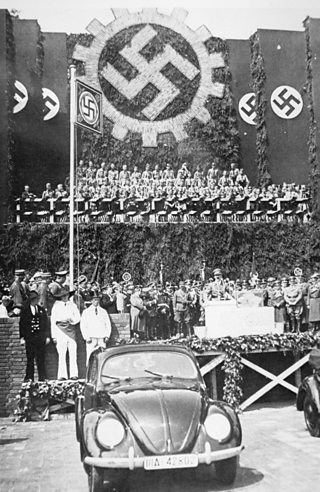 Removal of trade unions and their replacement with the German Labour Front (DAF) prevented strikes. Many Germans preferred low paid jobs to unemployment.

Kraft durch Freude (KdF or Strength through Joy) was an organisation set up to make lives better. This meant loyal workers received benefits such as subsidised theatre visits, sports facilities as well as cheap cruises. Although some disliked being regimented even in their leisure pursuits, others enjoyed the better facilities.

The production of the ‘people's car’, the ‘Volkswagen’ Beetle from 1938 suggested Nazism was benefiting workers. They could put their name down for one of these cars and save money each week for two years to buy one. In reality, the Volkswagen car did not become available due to the outbreak of war.

The German economy seemed to improve under the Nazis. Unemployment appeared to fall. This helped the Nazis portray themselves as the saviours of Germany.

In reality, the apparent fall in unemployement was due to propaganda and the exclusion of certain groups in official statistics. For example, women and Jews were sacked from their jobs but not counted as unemployed.

Although the problem of unemployment appeared to be solved, the Nazis did not succeed in their aim of achieving autarky, self sufficiency.