The Nazis created a terror-state. This was achieved through intimidation and brutality. Those living in Germany were too scared to disobey Nazi laws.

Hitler used a number of organisations to uphold and extend his control of Germany. 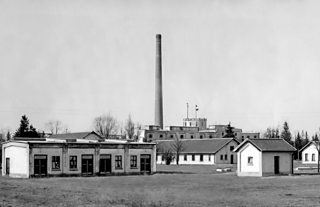 Dachau, the first concentration camp, before its official opening in 1933

The SS (Schutzstaffel) was originally Hitler’s elite personal body guard. It grew into a formidable private army, made up of fanatical supporters of Hitler. He used them as his execution squad to eliminate his opponents.

By 1934,the SS had been put in charge of securing Germany from internal and external enemies.

They controlled the concentration camps, where ‘undesirable people’ were imprisoned.

These included groups of people who the Nazis had deemed either dangerous to the state, to Nazi policies or were to be eradicated from society:

Life in the concentration camps was extremely harsh. Prisoners were made to work in horrendous conditions.

When reports of what prisoners experienced leaked out to the general population increased fear of being arrested was greatly increased.

This helped the Nazis keep the majority of citizens at bay.

The SD and Gestapo

The SD (Sicherheitsdienst) was the Nazi Party's intelligence and security service. Under the command of Heinrich Himmler and Reinhard Heidrich, the SD aimed to keep every individual in Germany under constant supervision.

After the Reichstag Fire, the SD started compiling a card index of the Nazis' opponents. They could arrest and imprison anyone and worked on the asumption that suspects were guilty. Once imprisoned, it was difficult for anyone to prove their innocence.

The SD was also responsible for tracking foreign opposition to the Nazis. This included censoring media.

Over 150,000 informants throughout the country would report any anti-Nazi feeling to the Gestapo.

The Gestapo and informants did not wear uniforms so Germans did not know when they were being spied on. Many ordinary Germans also informed on one another for personal gain or out of jealousy. This created tension and fear throughout the country.

Members of the Gestapo had powers to arrest and detain those people who were considered enemies of the state/Nazi Party. These preventative arrests were carried out separately from judicial control.

Those who were arrested were often violently treated, prior to release or imprisonment. Gestapo tactics included murder and torture of prisoners.

In 1939 the Reich Security Head office (RSHA) was formed. This amalgamated the Gestapo and the SD under the leadership of the SS.

The police force and people’s courts

Heinrich Himmler, the head of the SS, was also in charge of the police. This meant no-one investigated the crimes committed by the Nazis

Special 'People's Courts' made sure that opponents of the Nazis charged with treason were found guilty, even if there was little or no evidence.

Judges had to swear an oath of loyalty to the Nazis. This gave the Nazis greater power over the sentencing of political enemies and those deemed to be criminals.

The army became a visible presence in everyday German life. Flags, symbols and uniformed troops on the streets all created a clear impression of the power of the Nazi government.

Together with the use of informants this made people very cautious in raising any opposition to Nazi policy or rule.