On 23 June 2016 voters in the UK went to the ballot box to decide whether the UK should remain a member of the European Union. The referendum became known as BREXIT (BRitish EXIT).

Unlike General Elections fought across familiar political party lines, the referendum was centred on one question – “Should the United Kingdom remain a member of the European Union or leave the European Union?” and the available voting options were “remain” or “leave”.

The UK in the European Union 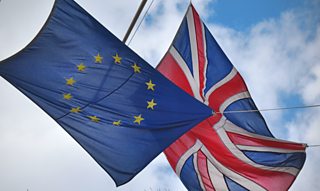 A Union Jack and a EU flag

The UK originally joined the forerunner to the European Union (called the European Economic Community) in 1973 after two previous attempts to join were vetoed by France.

Two years later there was a UK referendum on whether the UK should remain within the EEC. The electorate voted to stay in the EEC by 67.2% to 32.8%.

The modern European Union was created with the signing of the Treaty of Maastricht on 7 February 1992 by the members of the EEC. The treaty paved the way for closer political and economic integration for the 28 member nations and the creation of a new European currency – the Euro – which was to be adopted by the member states. The UK signed the Treaty but negotiated to keep its own currency rather than adopting the Euro.

Background to the referendum 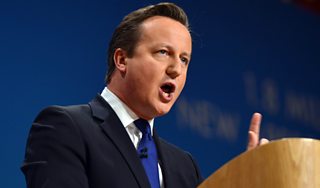 In the run up to the 2010 General Election, Prime Minister David Cameron stated an intention to hold a referendum on the UK’s continued membership of the EU. This was seen as an effort to appease members of the Conservative Party who expressed concerns with the EU and to counter the rise of anti-EU parties such as UKIP.

Broadly, the major British political parties (Labour, Liberal Democrats, Green Party, SNP, Plaid Cymru) backed the remain campaign with the Conservatives technically declaring themselves neutral. The UK Government officially backed remaining in the EU but Prime Minister Cameron allowed members of his cabinet to campaign for either side. 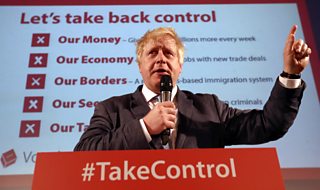 The Leave campaign found supporters among the ‘Eurosceptic’ wing of the Conservative Party (such as Boris Johnson and Michael Gove) and UKIP and a whole range of smaller political parties and pressure groups.

As a campaign strategy the Remain group focused on the benefits of continued membership of the EU – free trade, security, and a stronger international voice. They also highlighted the dangers to trade and prosperity of severing ties to Britain’s largest trading partner.

After a lengthy and hot-tempered campaigning period, the final overall result returned a narrow win for the leave campaign – 51.89% to 48.11%.

Across the different nations the results were: 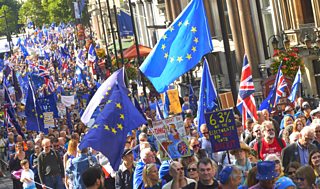 Pro-EU demonstrators at the People's March for Europe against Brexit

After the result was announced the pro-remain Prime Minister David Cameron resigned and Theresa May became leader.

On 29 March 2017 May announced that she had instigated Article 50 of the Treaty of Lisbon – the notice to the other EU members of the UK’s intention to withdraw from the EU. The Article allows two years for this process and as such the UK is scheduled to finally leave the EU on Friday 29 March 2019.

The negotiations regarding the terms, arrangements, and costs associated with leaving the EU are still in progress.

One other on-going outcome is the investigation into possible Russian state-sanctioned interference in the referendum campaign via social media to influence the outcome in favour of leaving the EU in an effort to destabilise democratic processes in the West.