Leadership of the Reds

The Bolsheviks were extremely fortunate in the quality of their leadership, particularly in Lenin and Trotsky. Throughout the Civil War, Lenin provided the energy and drive needed to inspire success, while Trotsky provided the organisation and charisma. 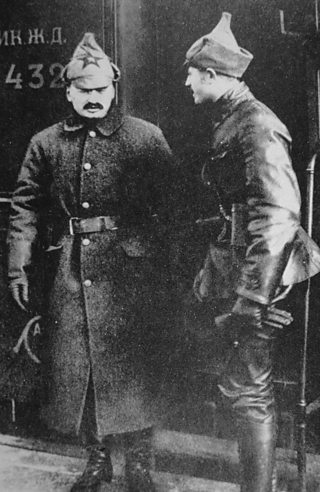 Trotsky became Commissar for War in the Bolshevik government in March 1918. A brilliant organiser and improviser, Trotsky created the Red Army out of the Red Guards and from the remnants of the old Tsarist army.

Although the appointment of ex-Tsarist officers was questioned, Trotsky insisted they would bring expertise essential to winning the Civil War.

Political commissars were drafted into army units to spread socialist ideas and maintain loyalty to the Bolsheviks.

Conscription was established, hundreds of thousands of peasants were drafted into the Red Army.

Trotsky imposed a very tough system of discipline and control over the Red Army. Officers found guilty of cowardice or treachery were executed. However, men who showed initiative and courage were promoted rapidly.

Trotsky travelled in an armoured train to the front lines to encourage troops. At times of crisis, he readily assumed personal command of areas under threat. He successfully inspired and encouraged troops to greater efforts, and to eventual victory.

Under Lenin's leadership, the Bolsheviks displayed total ruthlessness in making sure that they did not face rebellion and revolt in the areas they controlled.

The Constituent Assembly had been organised by the Provisional Government, to draw up a constitution for Russia. When it was elected, the majority of delegates happened to be Social Revolutionaries. The Bolsheviks feared opposition to their plans and closed the Assembly. 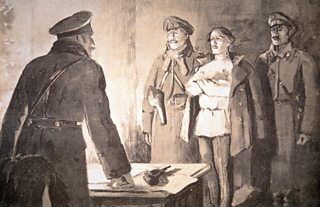 A Cheka officer interrogates a suspected 'enemy of the people'

Once the Civil War began, the Bolsheviks banned all political parties and arrested their leaders. They also closed down newspapers that opposed them.

The Cheka, the Bolshevik Secret Police, hunted down and arrested anyone who was suspected of hostility towards the Bolsheviks. By the end of the Civil War, they had executed over 100,000 political opponents.

"War communism" was introduced to help supply the war effort. In May 1918 a Food Dictatorship was established where the Bolsheviks requisitioned grain from the peasants.

Meanwhile, much of Russia’s industry was nationalised, giving the Bolsheviks total control of goods production. 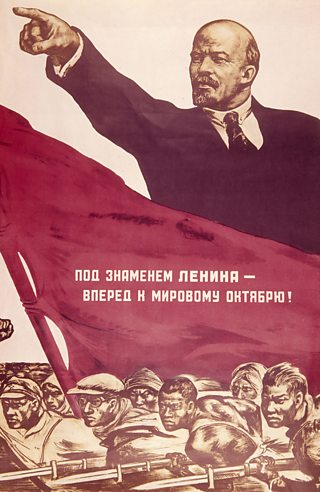 The Bolsheviks organised a highly effective propaganda campaign in the areas they controlled:

Propaganda told the people that living conditions would improve and wealth would be distributed more fairly. In contrast they warned that the White Armies and their leaders would destroy all the achievements of the Revolution, break up the Soviets and bring back the old system:

The Bolsheviks portrayed themselves as a patriotic party who would defend Russia from imperialists. This was particularly effective since the Whites had support from Britain, France and the USA.

The Bolsheviks spread the fear that Russia would be taken over by foreign countries and absorbed into their empires.