The contrast between the vitality and energy of summer and the cold stillness of winter is captured through a description of colour. We are told that the water, frozen as ice, appears opaque and is swan-white and crystal. This absence of colour gives an impression of a scene that is drained of life.

While the ice-skaters provided a moment of lively animation, they too are soon gone. The repetition of the word fades punctuates the tailing-off of the sounds of activity. We get the impression of things gradually breaking down and disappearing, and the repetition emphasises the leaching of life from the scene. 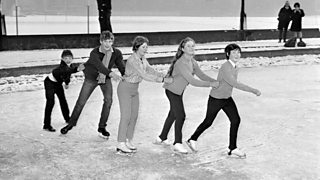 Children skating on a frozen pond

As the skaters leave, and the sounds of their movements and vitality disappear, the speaker captures the stillness of the scene.

This idea that, over time, all things deteriorate is also communicated through word choice. We hear that the woods fall, decay and break. Each word suggests that it is the natural order for things to gradually weaken and fail. We get an impression of the trees losing their strength, dropping to the ground and rotting away.

The speaker seems to avoid providing an optimistic, pleasant interpretation of the scene. Just as death is inescapable and inevitable, so too words and images associated with death dominate the poem.

As the sounds fade, so the winter light becomes dim and darkness creeps in. Morgan employs personification as the shouts of the skaters run off into the darkness and disappear. Here the blackness becomes the end of the spirit of life, swallowing all sense of lively energy. The shouts, testament to the vibrancy of the scene, seem to accept the inevitability of an end to all things.

In the final sentence of the poem, word choice is used effectively to convey the ravages of time and the inevitability of death. The motion of fog becomes a monstrous movement, something malevolent and frightening.

Once again, a reading of Tennyson’s poem allows us a greater appreciation of this idea - in Tithonus, the main character becomes a grey shadow. The fog, in Morgan’s poem, causes the light to fade and die. It represents the passing of time.