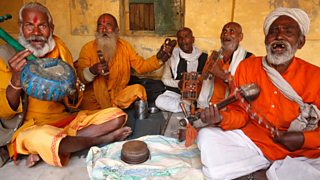 A group of Indian musicians

Indian music is easily recognised by the sound of its unique musical scales and instruments.

Traditionally, Indian musicians learn to play patterns of notes - ragas - by imitating and memorising music passed on from their teachers.

Most Indian music is based on:

The patterns of notes used in Indian music - ragas - are different to the scales used in Western music. They are associated with different times of day, season, mood and occasion.

The sitar is a long-necked, stringed instrument with six or seven main strings that have twelve or more strings running underneath them. It has a distinctive sound as can be heard in the audio clip below.

The sitar is often accompanied by the tabla - a pair of drums played side by side while sitting on the floor. They have a high pitched sound. They can be played with the hand and fingertips to produce different sounds. Listen out for these different effects in the audio clip below, which also features the bansuri - a traditional flute made from bamboo.

The role of the tabla is to keep time, although tabla players sometimes interact with the soloist.

Roopa Panesar plays the sitar, accompanied by the tabla