Events during 'The Berlin Blockade'

To further help economic recovery, on the 18 June 1948, the USA and Britain introduced a new currency, the Deutschmark, in the Allied zones – they did not consult Stalin.

Stalin was furious and worried about the USSR’s safety. He closed all land routes into Berlin on 24 June 1948. He hoped that this would make the Allies give up their control of Berlin altogether.

The only way to reach the Allied zones of Berlin was by air. 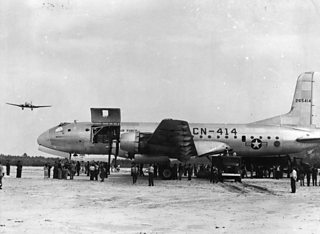 The Berlin Airlift lasted for 11 months. British and American cargo planes flew into the city at a rate of one every two minutes. Millions of tons of food, fuel and other supplies were delivered.

Despite this massive effort, the city still suffered from shortages and rationing had to be introduced. Electricity could only be switched on for a few hours each day. Stalin tried to persuade Berliners to register for Soviet supplies in the East – only a small number agreed. On 12 May 1949, after 318 days, Stalin lifted the blockade.

Results of the Berlin Blockade

Germany remained divided until 1990. In 1949 the three Western zones united to form the Federal Republic of Germany, also known as West Germany. In October 1949, the USSR formed the German Democratic Republic, also known as East Germany.

Berlin remained landlocked in Soviet controlled territory and also remained divided. It was this divide that led to the Berlin Crisis of 1961 and the building of the Berlin Wall.

The 'frontlines' of the Cold War were now drawn in Europe. This led to the formation of military alliances - The North Atlantic Treaty Organization (NATO) and the Warsaw Pact.