This poem, like Mrs Midas, comes from The World’s Wife, Duffy’s first themed collection of poems.

In this set of poems, Duffy considers both real and fictional characters, stories, histories and myths that focus on men, and gives voice to the women associated with them.

Although Havisham was published a year earlier, it makes a good comparison with this poem since both take the perspective of a woman living without her lover - Havisham having been jilted at the altar, while Hathaway has been widowed.

Anne Hathaway was the wife of William Shakespeare. She was seven years his senior and already pregnant when the 18-year-old, Shakespeare married her. 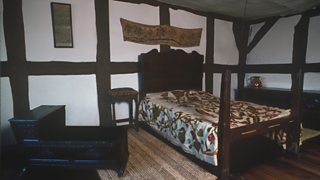 The poem begins with an epigraph taken directly from Shakespeare’s will in which despite being a man of some considerable property, he leaves Anne only his “second best bed”.

While some critics have viewed this as an insult, Duffy presents a new perspective, using the bed as a metaphor for the intense passion and romance shared by the couple.

The second best bed was in fact the couple’s marital bed, while the best was reserved for guests. Duffy imagines, then, that this legacy was the playwright’s last romantic gesture.