Chamberlain made the Munich Agreement with Hitler to prevent war, but, in the year after September 1938, there were several factors pressurising him to abandon his policy of appeasement:

The Italian invasion of Abyssinia (1935) and the events of the Spanish Civil War (1936- 1939) had led many on the Left to question if pacifism was the correct response to the use of force by Fascist Powers.

By 1937, the Labour Party had abandoned its support for appeasement and was arguing for a more aggressive response. This encouraged the public to question the policy of appeasement.

October 1938: there was more evidence of a change in public opinion. The Conservatives lost two by-elections. They held onto a third seat in parliament at Oxford with a greatly reduced majority. Appeasement had been one of the major issues during the elections.

Winston Churchill attacked appeasement in October 1938 as a defeat without a war. There were also a growing number of other Conservatives (Anthony Eden, Harold McMillan) who were prepared to criticise Chamberlain's policies.

In November 1938, the Nazis launched a violent attack on German Jews, the Night of the Broken Glass (Kristallnacht). It resulted in the death of a number of Jews and the destruction of property. It helped to turn public opinion in Britain against Hitler’s Germany. 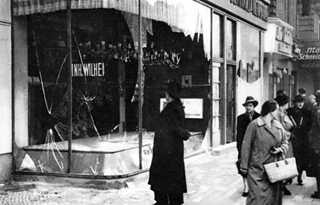 Loss of trust in Hitler

March 1939: Germany invaded the rest of Czechoslovakia. It was clear that Hitler could not be trusted to keep his word.

Response to the Pact of Steel

May 1939: the signing of the Pact of Steel in May 1939 demonstrated that Germany and Italy were prepared to help each other in a war. This confirmed the aggressive nature of Germany and Italy.

Britain had been rearming in the years after the 1935 general election. Large amounts of money had been spent on developing the armed forces, especially the RAF. Chamberlain believed that he could use this strength to contain Germany and stop Hitler from expansion.

When Germany invaded Poland in 1939, Britain and France declared war. This ended the British government's appeasement policy. Includes Neville Chamberlain’s radio broadcast from 3 September 1939, announcing that a state of war existed between Britain and Germany.