Christians believe that when Jesus died on the cross, he was sacrificed for the sins of humankind. Jesus’ death and resurrection were an act of atonement that healed the relationship between God and humanity that had been broken by Original Sin.

This allowed humans to be reunited with God after death. Christians call this salvation and believe that it is proof of God’s omnibenevolent nature.

Break down the word ‘atonement’ like this: at-one-ment. Jesus was sacrificed for the sins of humankind, making God and humans at one again.

The idea of sacrificing someone for other people’s sins may be quite unfamiliar to the modern world. However, the Old Testament describes how animals, such as lambs or goats, were ritually killed or sent out into the wilderness to make up for the sins of human beings. For example:

Aaron … is to lay both hands on the head of the live goat and confess over it all the wickedness and rebellion of the Israelites – all their sins – and put them on the goat’s head [ie make the goat symbolise the Israelites’ sins]. He shall send the goat away into the wilderness in the care of someone appointed for the task. The goat will carry on itself all their sins to a remote place; and the man shall release it in the wilderness. (Leviticus 16:20–22)

Jesus is often referred to as the Lamb of God. This is because, like a lamb that would traditionally have been sacrificed, Christians believe that he died to make up for people’s sins. 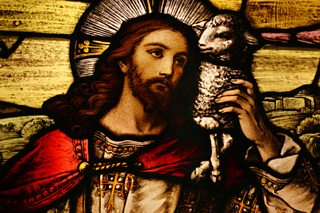 Jesus is believed to be the Lamb of God because he sacrificed his life for humankind.

Christianity teaches that the Prophet Isaiah, who was an Old Testament writer, predicted the coming of Jesus: The punishment that brought us peace was on him, and by his wounds we are healed (Isaiah 53:5).

This is important as Christians believe that Jesus is the Messiah for whom the Jews were waiting.

Why is Jesus often referred to as the Lamb of God?

This is because lambs were commonly offered as sacrifices to God to make up for human beings’ sins. Jesus was sacrificed on the cross to atone for the sins of humankind.