On this occasion Jesus’ human nature and his divine nature are clearly seen.

Jesus goes with his disciples to the Garden of Gethsemane, an olive tree plantation.

Jesus takes Peter, James and John (his inner circle of disciples) further into the garden with him.

Jesus is deeply distressed about what lays ahead. He says, “The sorrow in my heart is so great that it almost crushes me.”

He instructs Peter, James and John to keep watch. Even though they are aware of his distress and realise that something important is about to happen, they cannot stay awake.

Jesus’ human nature is shown in that he asked that the cup of suffering be taken away from him. Perhaps he was asking God to bring about the Kingdom of God without him having to suffer.

However, Jesus showed his divine nature as he accepted God’s will, even though it meant his suffering and death, “Yet not what I want but what you want.”

The disciples did not appreciate the seriousness of what Jesus was going through. This meant that he had to cope with the mental suffering on his own. He asked them three times to stay awake and keep watch, but they were unable to do so. Jesus questions Peter, asking could he not even stay awake for one hour. He warns them not to fall into temptation, “the spirit is willing but the flesh is weak”.

Jesus can see the arrival of Judas with the chief priests, elders and the armed crowd. They are coming to arrest him. He says to the disciples, “The hour has come! Look the Son of Man is now being betrayed into the hands of sinners.”

Judas showed the crowd who Jesus was by kissing him on the cheek, a common way to greet a friend. He said “Peace be with you, teacher.” 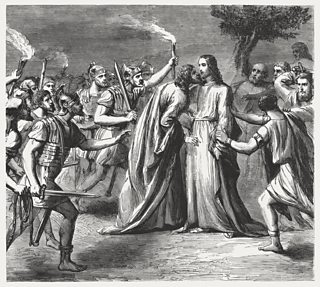 Jesus replied, “Be quick about it friend.”

The crowd arrested Jesus. One of the people with Jesus drew his sword and cut off the ear of the high priest’s servant. Jesus allowed himself to be arrested and demanded that the violence stop. The disciples were so afraid and shocked at what had happened that they all ran away.

The events at the Garden of Gethsemane offer support and comfort to Christians today when they are going through difficult times in their lives. They believe that Jesus understands their pain because – like all human beings – he experienced suffering.

This story teaches Christians that in times of need they should pray to God, just as Jesus prayed to his Father.