There are many reasons why some countries are LEDCs and why people living there find it difficult to move out of absolute poverty.

Climate - Many LEDCs have a very harsh climate. They may have long periods of extremely hot weather, which can affect crops and prevent harvesting. Some of these crops may be exported. If the crops cannot be harvested, the country cannot earn money from trade with foreign countries.

Natural disasters - LEDCs can be badly affected by natural disasters. For example, Bangladesh is one of the world's most densely populated countries and is also one of the world's poorest countries. It suffers severe flooding every year. In 1998, over 57 per cent of the country was flooded. More than 1,300 people died. Seven million houses were destroyed, as well as a lot of the country's crops. Many Bangladeshis live in absolute poverty, so the loss of crops and money caused the cycle of poverty to continue.

Unfair trade - Some farmers in LEDCs do not receive a fair price for the goods they produce, eg coffee. If something happens to the crop because of poor weather, the profits of the retailer do not suffer as the price we pay for coffee can increase. However, the farmer's profits do not. The farmer receives a small cut of the price coffee is sold for in the UK because this price also covers exporting and retailing.

If a product is labelled as 'Fairtrade', it means that the farmer receives a fair price for the crops and a fair proportion of that price is put back into farms and communities to help future development. 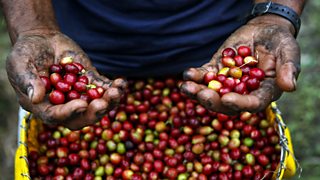 Debt - When LEDCs take out large loans from MEDCs to fund development projects (eg building roads and schools) the interest is often unaffordable, and yet it continues to increase. These large debts prevent LEDCs from helping their own people. At the start of 2013, around £2.34 billion was owed to the UK by 24 nations, £825 million of which was interest.

War - War increases the problems of debt for poor countries. For example, when Eritrea was involved in a war with Ethiopia between 1998 and 2000, approximately 70,000 people died. The money spent on weapons could have been spent on food production. If people who usually work as farmers are fighting wars, they cannot grow and harvest food.

Corruption - Some of the aid given to LEDCs has never reached the poor. In some cases it has been used to fund a war.

Lack of education - In densely populated, poor countries many children have little or no access to education. The United Nations Educational, Scientific and Cultural Organisation (UNESCO) reports that in sub-Saharan Africa over one fifth of children between the ages of about 6 and 11 are out of school, followed by one-third of youth between the ages of about 12 and 14. Many people who believe in sustainable development argue that in poor countries only education will enable people to help themselves out of poverty.