The video below describes the events of the March from Selma 1965 and its consequences.

Martin Luther King organised a march from Selma to Birmingham, Alabama, which began on 7 March 1965 with around 600 marchers taking part.

When the marchers reached the outskirts of Selma they were attacked by state troopers and local police.

The day became known as ‘Bloody Sunday’. King and his supporters staged another march along the same route on 21 March.

Once in Mongomery, King gave a speech to a gathered crowd of 25,000. Within hours of this speech, a white 39 year old civil rights campaigner, Viola Liuzzo had been murdered.

The murder outraged President Johnson, who commented, Mrs Liuzzo went to Alabama to serve the struggle for justice. She was murdered by the enemies of justice who for decades have used the rope and the gun to terrorise their neighbours.

Throughout the 1950s and early 1960s the focus of the civil rights movement had been on the southern states. However, by the mid-1960s many African Americans were still living in ghettos in northern cities. 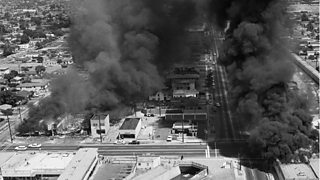 Burning buildings during the Watts riots

This meant that the police made an enemy of the black people living there due to their prejudice.

In August of 1965, police stopped a young black man on suspicion of drink driving, which ignited the riots.

These riots lasted for six days, 34 people were killed, 900 injured and 4000 of those involved were arrested.

The black population of Chicago increased dramatically during the 1950s.

However many of the black residents lived in overcrowded areas of the city.

In one incident, police had to shut off a fire hydrant that had been opened by youths to cool down during the hot weather.

A fight soon broke out and some violence followed – windows were smashed and shops looted. The violence escalated into a full scale riot. The next night, rioters used petrol bombs and guns.

Many more riots followed, with perhaps the most destructive happening in Detroit.

The riots demonstrated that the idea of non-violence was not as valued in the northern cities as it had been in the south.

Many northern black people felt that the only way to give themselves a voice was by the use of violence.

The civil rights movement began to split in the 1960s. Many in the movement still supported Martin Luther King and non-violence.

However, others decided that a much more aggressive approach was required – which they named Black Power.

From around 1964 onwards, black leaders such as Malcolm X and Stokely Carmichael began to reject integration in favour of separatism.

Non-violent protest was replaced by the idea of self-defence and aggression.