Demolition of Favelas and Construction of Social Housing

A few days after Rio de Janeiro won the bid to host the 2016 Olympic Games, the local government released a list with 119 favelas to be cleared due to developments related to the upcoming world event e.g. favelas next door to the Maracanã stadium (the Olympic stadium).

New housing was required quickly to re-home the residents in the favelas.

The Minha Casa, Minha Vida/MCMV (My House, My Life) project has been running since 2009 and aims to provide one million houses for middle and low-income households throughout Brazil.

In Rio de Janeiro, the new units are located in the poorer north and west zones, where land is cheap and there is plenty of room for development. Houses are built from timber frames and equipped with solar panels for cheap electricity and biogas is generated from waste and used for cooking.

Unfortunately, communities from the favelas were split up and sent to different MCMV housing projects. The sites are far from residents’ employment and the remote location forced the low-income families, for whom the housing is targeted at, to spend more money travelling into the city for work, leisure and entertainment.

Due to the rate of construction, and lack of quality control, many of the new accommodation blocks were poorly built and are at risk of collapse. Residents in MCMV property complain about their homes having leaking roofs and walls that are crumbling allowing rain to soak through causing flooding. The major complaint from residents is the lack of space, and the fact their new home offers no real improvement on the favela they left.

Authorities are attempting to transform favelas through a citywide policy called 'pacification'.

Stage one – Armed police units, backed by soldiers and marines, go into favelas to drive out criminal gangs. Permanent police presences are established in what had often been no-go areas for security officials.

Stage two – With the shanty town secured, staff from Rio's municipal authority can start to provide social services such as schools, healthcare centres, and rubbish collection.

With a population of 100,000 people, stretching for more than two miles, the Complexo do Alemao favela is one of the largest favelas in Brazil. 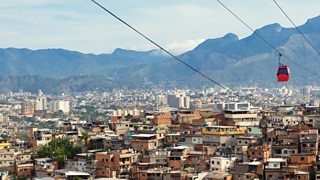 Pacification began at the end of 2010, with 300 police officers and troops entering the favela, with tanks and helicopters. They met little resistance, as gang members chose to flee rather than fight.

Opened in 2011, the Teleferico do Alemao cable car system is the most obvious outward example of how the lives of people in Complexo do Alemao have been transformed by pacification.

The cable cars enable residents to get from one end of the favela to the other in just sixteen minutes. To walk it would take two hours, and each local person gets a free return ticket every day. The system also connects to Rio's railway network, enabling the people of Complexo do Alemao to get quickly into the city centre, opening up the opportunity of better paid work than is locally available.

However, when the local authorities withdrew funding to subside the cost of the free tickets for locals and maintenance programmes of the machinery, the cable car closed in September 2016. This has forced those needing connections to the CBD and beyond to pay more in transport and use the moto-taxi or minibus services, which are slower. The cable car is unlikely to re-open in the near future.

So far thirty of Rio's favelas, including many of the largest, have been pacified since 2008, benefiting a combined population of 400,000. This leaves 1.1 million people living in hundreds of other favelas across the city still to benefit from pacification.