The assembling of components is a crucial step in the manufacturing process. There are a range of options available and selecting the one that works best for the product is of crucial importance.

The choice of assembly method is determined by factors such as design requirements, cost, and the materials to be used. 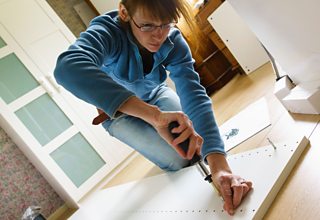 There are various methods used to join and assemble wooden components. Generally, there are two types of basic woodwork construction – carcase construction, and flat-frame construction.

Both of these types of construction utilise a combination of woodwork joints, adhesives, and fittings such as nails and screws.

Knock-down fittings are used to assemble many products. These mass produced fittings allow for items to be replaced, disassembled, or altered in their configuration.

They are commonly used in flat-pack furniture that is designed to be built by people in their homes with simple, readily available tools such as screwdrivers. 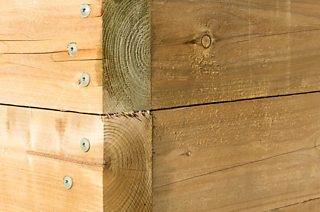 A butt joint in a wooden box

Carcase construction is used to make itens such as cupboards, kitchen units, and other types of storage. These generally feature the following types of assembly joints: -

A butt joint is a simple joint in which two flat surfaces are joined together with glue and pins. It is generally weak compared to other joints and not as aesthetically pleasing.

A corner housing is a joint that joins one end of two components that have half the material removed from each so that they overlap to give a completed corner. It is a more attractive joint than the butt joint and has a larger gluing surface which makes it stronger.

A through housing is a joint where a slot is cut half way through the material for another piece be placed into it.

A stop housing is a joint where a partial slot is cut out of one surface and a recess is cut out of the joining material so that the both fit together perfectly.

A comb joint is sometimes also know as a finger joint. It’s when there a number of space removed from two pieces of material so that when the both fit together they comb 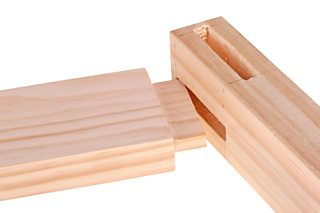 A mortise and tenon joint

Flat-frame construction is generally used on items such as doors and windows and have very little depth them. These generally feature the following type of joinings: -

Butt joints are also used in flat-frame constructions. They are a simple joint in which two flat surfaces are joined together with glue and pins. It is generally weak compared to other joints and not as aesthetically pleasing.

A mitre is a simple joint in which the two pieces of wood are joined with an angular cut on both pieces. This angular cut is generally 45 degrees and hides the end grain of the wood making it a more attractive wood joint.

A corner lap is a joint where two components to be joined have material removed from each each end so that they overlap to give a completed corner. A more attractive joint than a butt joint with a larger gluing surface which makes it stronger

A mortise and tenon joint is a more complex joint which involves more marking and cutting out. There are two parts to this joint. One component has a channel cut out of the middle all the way through that the other piece will be placed into, this is the mortise. The other component has the tenon in which the wood has two shoulders cut into to allow it to be placed in the mortise. This is very strong joint.