Jesus tells the parable of the workers in the vineyard to further explain what the Kingdom of God is like.

A landowner goes out early in the morning and hires men, agreeing to pay them the daily rate - a silver coin for a day’s work.

He hires them at various times throughout the day - 9am, 12pm, 3pm and 5pm and promises all of the workers a fair wage.

When the end of the day came, the landowner said to his manager to pay the workers, starting with those who had been hired last. Those who began working at 5pm were given the daily rate - one silver coin.

When it came to those who had been hired first (early in the morning) they thought that they were going to receive more. When they too were given the standard daily wage they began to grumble. They were angry because they had done a lot more work than those who had started later in the day.

The landowner did not listen to their complaints and reminded them that they had agreed to the daily rate of pay when they were hired. He said, “Am I not allowed to do what I choose with what belongs to me? Or are you envious because I am generous?”

The landowner then says, “The last will be first and the first will be last.” 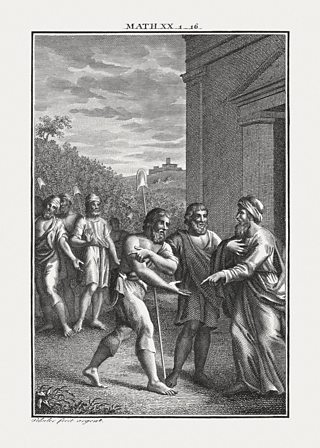 Copperplate engraving depicting the reward of the workers in the vineyard (Carl Schuler, published circa 1850)

This means that those people who consider themselves the most important in the Kingdom of God because of their good deeds will be surprised - this is not how God’s grace works.

People who come to Christianity later in their lives will still be given the same reward (entry into the Kingdom of Heaven) as those who have been faithful all their lives.