Why do we know so much about the plague and its experience? 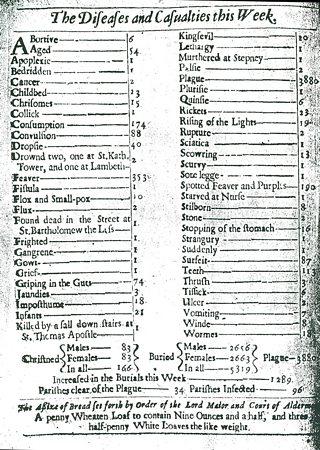 Historians have good data about the plague because records of the deaths were kept at the time on the weekly Bills of Mortality – although the doctors of the time might have misdiagnosed some of the deaths, 86,595 deaths were recorded in the city of London alone.

Also, a number of Londoners recorded the events of the plague at the time. The diarist Samuel Pepys, could not stop himself going out and wandering round the streets to see what was happening and recording his encounters. He recorded the panic that gripped the city of London, the money people paid to protect their homes, of his home, his wife, his friends, the plague and its victims and about the Great Fire too. Forced to leave London he wrote of burying his Parmesan Cheese, I did dig another [hole], and put our wine in it; and I my Parmazan cheese, as well as my wine and some other things.

On the horrific nature of the plague in London and how quickly the illness spread, Dr. Nathaniel Hodges commented in 1666: The disease, like the Hydras heads, was no sooner extinguished in one family, but it broke out in many more. In little time we found our task too great, and despaired of putting an entire STOP to the infection.

In 1722, the writer Daniel Defoe wrote A Journal of Plague Year. It reads as though it is a personal account, but in fact it was a fictional story based on records of the time, although it may also have been based on a diary kept by his uncle.

What do modern historians think about the Great Plague of 1665?

Most modern historians simply record the facts of the plague and its effects.

There is a debate between historians about whether the plague was yet another outbreak of the Black Death, or whether it was a separate and self-contained outbreak.

Remember, that while 100,000 died from the plague in London, many more did not – including Samuel Pepys, Dr. Nathaniel Hodges and Rev.Thomas Vincent who all went on to write about their experiences. Many of these people would have had daily contact with plague victims and survived.

Why did the Plague disappear? Was it the Great Fire of London in 1666? 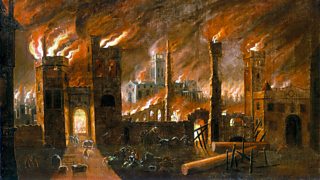 Although often cited as 'wiping out the plague', the Great Fire of London in September 1666 in actuality had little impact. Most of the cases by then were outside the city centre and cases had fallen before September. The fire did however cause the city to be rebuilt in stone with more generous open spaces and less overcrowding, which contributed to the end of plague outbreaks. It was therefore - an indirect saviour.

Some scientists suggest that the black rat had started to develop a greater resistance to the disease. If the rats did not die, their fleas would not need to find a human host and fewer people would be infected. Probably, people started to develop a stronger immunity to the disease. Also, in plague scares after 1666, more effective quarantine methods were used for ships coming into the country. There was never an outbreak of plague in Britain on this scale again.

You may wish to study the facts of Medicine through time, and to compare the Great Plague of 1665 to the Black Death.