The first section of Sunset Song begins with a description of a hot and dry summer where the heather had not reached the full passion of its colour yet.

Metaphorically, this relates to the main character, Chris Guthrie, who has not yet reached full maturity and it is her process of development which is the main theme of the plot.

The beauty of nature is apparent, and the 'natural' side of Chris is stressed - her mother tells her, there are better things than your books or studies or loving or bedding, there's the countryside your own, you its, in the days when you're neither bairn nor woman.

We learn of Chris's family background and of her parents, John Guthrie and Jean Murdoch. Though initially kind to his wife, Guthrie emerges as dour, cold and hard. He considers it to be God's will that his wife should keep having children. After Will and Chris came Dod and Alec, seven years later twins arrived and Chris's mother lost her sweet blitheness.

Chris does well at school and feels a growing conflict between her education and life at home on the farm. Will was beaten for taking the name of Jehovah in vain and grows to hate his father. Chris hated also and she didn't hate, father, the land, the life of the land.

Chris is upset by the pain her mother suffers in giving birth to twins. Jean wants to move to a bigger house and although John at first disagrees, he loses the lease on his farm when, with typically stubborn independence, he becomes involved in an altercation with a motorist.

This episode prefigures the destruction caused by machinery in modern civilisation (given its fullest expression - in the machinery used in war that cuts down the young soldiers). 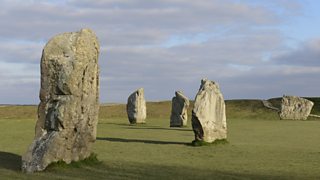 The family moves to Blawearie when Chris is 15 years old. The journey is exhausting and Guthrie is unsympathetic to his wife and children. His first act at Blawearie is to confront a man shooting on his land.

Chris discovers the Standing Stones, a place where she can take refuge from her fears for the future and from family conflicts, particularly between her father and Will.

Chris attends college at Duncairn where the other students are jealous of her abilities and she is looked down upon as the daughter of a farmer of no account. She makes friends with Marget Strachan whose father's socialist values contrast strongly with John Guthrie's strict religious views.

However, one theme of the novel is that nothing endures, and Marget leaves to live with her aunt in Aberdeen. The crude stories Marget tells her, and her subsequent confrontation with Andy 'the daftie' from Cuddiestoun, reveal Chris's worries about growing up and being involved with men.

A new character is introduced when the Reverend Gibbon is chosen as minister of the Kirk. Significantly, he preaches on the Song of Solomon, a sensual book of the Old Testament. He makes his rounds of his parishioners and lends Chris a book. 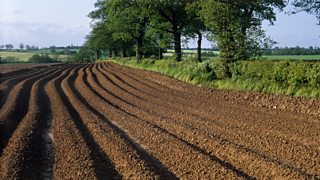 Chris is aware that she is growing up and notices her father looking lustfully at her when she is doing the washing. Her mother tells her, You'll have to face men for yourself when the time comes.

In the novel, Chris represents the land (some say Scotland itself) - she is newly-ploughed, ready and waiting for the weather to break at the end of the chapter, yet unprepared for the enormous changes that are to come.

As she looks down at Blawearie, she hears Dod and Alec crying:

It was then, as she flew down the hill with her own face white, that the sky crackled behind her, a long flash zig-zagged across the Grampian peaks, and far across the parks by the hills she heard the hiss of rain. The drought had broken at last." (Ploughing)

Dod and Alec are crying because their mother has killed herself and the twins. Chris’s life will never be the same again.