Diabetes is a condition where the blood glucose levels cannot be controlled by the body. There are two types of diabetes - type 1 and type 2.

Type 1 diabetes is a disorder in which the pancreas fails to produce enough insulin. This can be detected from an early age. It is characterised by uncontrolled high blood glucose levels and it can be controlled by injecting insulin. 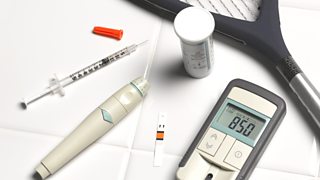 People with type 1 diabetes have to monitor their blood sugar levels throughout the day. Their levels of physical activity and their diet affect the amount of insulin needed.

They can help to control their blood glucose level by being careful with their diet, and eat foods that will not cause large increases in blood sugar level, and by exercising, which can lower blood glucose levels due to increased respiration in the muscles.

In type 2 diabetes the person's body cells no longer respond to insulin produced by the pancreas. It is more common in older people. It can be controlled by a carbohydrate controlled diet and an exercise regime. Carbohydrate is digested into glucose, which raises the overall blood glucose level. There is a correlation between rising levels of body mass in the general population and increasing levels of type 2 diabetes.

Body mass index (BMI) is used to show if a person is a healthy mass for their height.

People who are overweight or obese have an increased risk of developing type 2 diabetes.

A waist:hip ratio of over 0.85 in women and 1 in men is considered an indicator of obesity.

Describe the pattern in this data.

This matches a general increase in the number of people with type 2 diabetes from 1990 to 2000.

Tip: Use the labels on the axes to help you describe the relationship between the data in the graphs.