The events of the novel take place in chronological order, over the course of five days, but gamekeeper Duror’s hatred and Lady Runcie-Campbell’s inner conflict have been building for many years.

It is the arrival of the cone-gatherers, there to gather seed to enable the replanting of the forest after World War Two, which initiates the events of the novel. The brothers act as catalysts.

The central story charts Duror’s descent into madness and the effect this has on the other characters. He is first seen in the background, hiding in the woods full of hatred. He moves to the forefront of the novel as his unbalanced mind is gradually exposed.

When the cone-gatherers move into the hut in the wood, Duror’s one area of escape and solace, the forest, becomes a place which fosters his hatred and thus prompts his rapid spiral into madness.

The deer hunt is a significant event in the novel because it brings together all the characters, exposing their true selves.

The full extent of Duror’s mental instability is revealed when, in his mind, the fatally wounded deer merges with his grotesque wife and he slits its throat. This is the first outward sign of his evil.

Calum identifies with the deer and becomes the victim alongside it and Lady Runcie-Campbell fails to act against Duror. Instead, she wishes to remove the distasteful presence of the cone-gatherers from her land.

Calum tries to save an injured deer, but Duror goes into a frenzy, stabbing the deer repeatedly. Mr Tulloch interprets this as an attack on other people, like Calum or Duror's wife Peggy. Tulloch sees this as the turning point in which Duror decided to kill Calum. 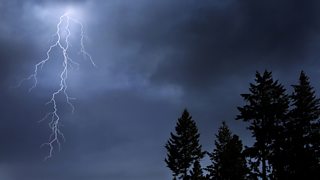 The cone-gatherers take shelter from the lightning storm

When the brothers break into the beach hut to shelter from the ferocious storm, Neil feels a sense of entitlement because his anger at his lowly predicament has grown since the deer hunt. He pushes at the door furiously, forcing his way into the luxurious lodging he has been denied.

Lady Runcie-Campbell’s encounter with the cone-gatherers is essentially a test which she fails due to her allegiance to her aristocratic code.

The irony in her oath For God’s sake, get out, when addressing Neil is apparent, considering her Christian beliefs. Unfortunately, these actions prompt a degree of frustration in Neil which he is unable to overcome.

The death of Calum (resolution)

The final and climactic scene in the novel is a dramatic one. Duror, now almost completely insane and angered even more by Neil’s refusal to help Roderick, murders Calum in the tree, thus destroying the freak that had tormented him.

He is left with so infinite a desolation that he takes his own life. It is that vision of Duror, utterly broken and falling into the abyss, that is to haunt Lady Runcie-Campbell for months.

The grief that Duror caused continues in Neil’s moans and yelps of lamentation, but at the same time there is hope in the figure of the upper class Lady on her knees as if begging forgiveness. Calum’s death gives the other characters a reason to regret, to remember and to change.