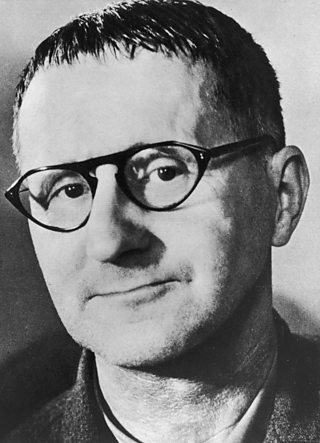 Bertolt Brecht (1898-1956) was one of the most important theatre practitioners of the twentieth century. He challenged the way audiences reacted to drama.

Rather than connecting with emotionally complex characters or being carried away by the story, Brecht wanted audiences to think about the social issues being confronted by playwrights in their work.

Brecht employed a number of devices in his plays designed to:

This style came to be known as Verfremdungseffekt, or audience‘alienation’.

Brechtian theatre also makes regular use of announcements and summaries, as well as comedy, music and song.

The theatre can never cause a social change. It can articulate the pressures towards one.

McGrath wanted the company to engage the audience. He wanted his actors to be involved in researching and preparing the material that they would be delivering. The 7:84 company were each given an area to research and their findings were drawn together in the scripting process.

Use of music in the play is very significant.

In his preface to the play, McGrath wrote of creating a work which deviated in tone from traditional Gaelic works of ‘lamentation’.

To inject the play with an exuberance and vitality, McGrath mixes parodic and satirical tunes with folk ballads, Gaelic song and contemporary popular music (ie Country and Western). As a result, the play is livelier and more entertaining than its sobering subject matter would suggest.

Music Hall was a popular form of entertainment in Scotland from the mid-nineteenth century to the mid-twentieth century. It took the form of a variety entertainment show, with a number of acts, including comedians and singers, performing over the course of the evening.

The Scottish actor, singer and comedian, Harry Lauder, was a Music Hall celebrity in his day. Lauder had an international reputation and was the first Scot to have his records sell over one million copies.

With the development of other forms of entertainment (cinema and radio for example) Music Hall became unfashionable. Today, the Music Hall tradition is often regarded as ‘kitsch’ or ‘parochial’.

It is clear to see how The Cheviot, the Stag and the Black, Black Oil positions itself as ‘music hall’ in its use of variety performance. Nods to Music Hall are also made through self-conscious ‘tartanry’ – references are made throughout to kilts and bagpipes, and stereotypes (such as in the lazy/drunk Highlander) are used for comic effect.

Similar to Music Hall, pantomime has a long tradition in Scotland as a form of popular entertainment. Unlike Music Hall, however, pantomimes continue to draw in huge audiences every year.

Pantomimes tend to be humorous, and are usually set in chaotic worlds similar to our own. Characters have a series of mishaps, or are faced with a number of challenges that they generally are able to overcome by the show’s end.

Beneath the slapstick comedy and fantastical storylines, pantomimes deal with themes that most theatre goers would recognise, such as poverty, unemployment and neglect.

McGrath certainly appreciated this rich tradition and made use of many conventions of pantomime to provide a comedic counterpoint to distressing factual sections. An example of pantomime can be found in the middle of the section on ‘the stag’, with the arrival on stage of 'two comic-stereotype HIGLANDERS'. Their dialogue descends into farce, characterised by misunderstandings and knowing puns:

HIGHLANDER 2. Now at that time, Lord Macdonald was driving people down to the shores…

This sketch, with added drum roll to indicate the comedian’s punchline, allows McGrath to quickly convey the lazy stereotypes of drunk and unintelligent Highlanders.

Through these characters McGrath also makes the more serious point that the Highland folk were perhaps not focused enough on forming an organised resistance to the Clearances.