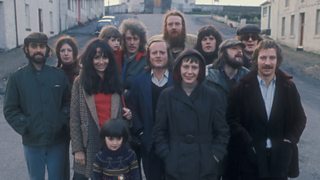 In 1971, McGrath, his wife Elizabeth MacLennan and her brother David founded the 7:84 touring theatre company. The name came from a statistic published in The Economist in 1966 that stated only seven per cent of the UK population owned eighty four per cent of its wealth. As the name indicates, the express aim of 7:84 was to produce radical, popular theatre with a strong political message.

In 1972, McGrath took the 7:84 project north, and formed a Scottish touring company.

7:84 (Scotland) engaged with class issues and took an interest in national and regional identities. The Cheviot, the Stag, and the Black, Black Oil was the first play to be produced by 7:84 Scotland. It is probably the play for which the company is best remembered north of the border.

Writing in 1990, Elizabeth MacLennan, outlined why 7:84’s brand of theatre was so successful in Scotland:

Scotland is distinguished by its socialist, egalitarian tradition […] its energetic participation in argument and contemporary issues. Within its separate educational, legal and religious systems is a strong […] sense of cultural identity. Culture and politics are not dirty words. We felt our plays there should reflect and celebrate these differences in language, music, political identification and carry on the arguments.

Both branches of the 7:84 company (Scottish and English) enjoyed great success for many years, and continued to push a radical socialist agenda in their work.

In 1984 the Arts Council in England withdrew its financial support, and 7:84 (England) collapsed. In 1988 McGrath walked out on the 7:84 (Scotland) company in protest against changes suggested by the Scottish Arts Council.

McGrath continued to write for television and film, as well as producing lectures, articles and essays.

John McGrath died of leukaemia in 2002. Obituaries commemorating his life celebrated McGrath’s commitment to social justice and recognised him as a pioneer of British theatre.