Act Two begins with a confrontation between Jack Hogg and Phil. Jack has design magazines for Alan, and Phil is quick to taunt him. Jack defends himself, calling Phil and Spanky bullies and berating their need to taunt Hector and anybody who shows an interest in anything. Phil responds by describing the designers as:

...a bunch of no-talent, no hopers, arse-licking your way up the turkey runner to Barton's office.

This reveals Phil's resentment for those in a higher position than himself. Jack is unmoved, as shown by his parting words:

...grow up. There's a real world out there. Some of us have to live in it 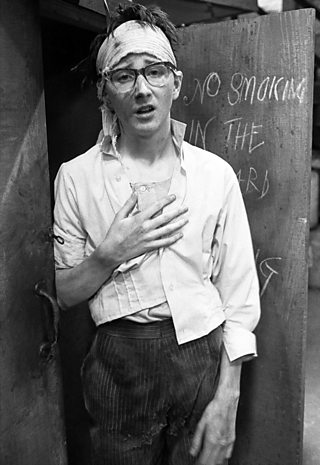 Hector after being placed in the cupboard

Lucille then enters and a farcical, comic scene ensues. A dishevelled, bandaged and partially-naked Hector appears at the window causing Lucille to scream and exit, terrified. Hector makes it into the slab room, but is bundled into a cupboard when Mr. Curry arrives looking for gum. Hector hands this to Phil in a bid to remain concealed.

When Curry exits, Hector attempts to leave the cupboard, but is stopped by Phil, who threatens him with a knife before exiting. Spanky then enters and attempts to console a now distraught Hector. The severity of Phil’s aggressive behaviour is once again diluted by humour, this time of a physical nature.

Characters continue to enter and exit, forcing Hector to bundle himself in and out of the cupboard before finally getting his altered clothes from Phil. The final result of the makeover is revealed - Hector is left looking absurd in misshapen clothes and a balaclava which hides his new ‘hair-cut’. Phil and Spanky convince him he looks great and he heads off to find Lucille.

The tone changes when Sadie enters to sell afternoon snacks. Once again, she is disrespected by the Slab Boys, while Alan is a true gentleman.

Lucille arrives and she and Sadie share an intimate conversation. Sadie reveals that she is unhappy in her marriage and that she is trying to save her money to leave. She also discloses that she has fought breast cancer and that her husband, accidentally, threw away her prosthetic breast. She advises Lucille to steer clear of men, Lucille's youthfulness is evident in her response:

Sadie
Wait till you get to my age and all you’ve got to show’s bad feet and a display cabinet...
Lucille
Who wants to get to your age?

Phil receives a phone call which he assumes is the Art School, calling to inform him that he has gained entrance to the course. It is actually the hospital informing him that his mother has disappeared.

Phil turns his anger at the situation onto Alan and, filled with bitterness about Alan’s elevated position in society, proceeds to call out Alan’s ignorance to life.

Phil’s rant reveals the traumatic nature of much of his childhood, including his mother’s attempted suicide. It is evident that Phil's anger has been displaced onto Alan as he is unable to speak openly about his emotions, perhaps to save face or perhaps because he simply is unable. He concludes by lunging at Alan before storming out, declaring:

I’m away to join the hunt. I’ll send my maw’s head back for your dad’s trophy room...Alan!

It is worth noting that this is the only time in the entire play that Phil uses Alan's correct name.

When Phil receives his wage packet he discovers his P45 form, indicating that he has been fired. He seems unmoved by the news and quickly gives up on assisting Spanky, as he no longer works in the slab room. Spanky replies sarcastically, you never did, Phil, highlighting Phil’s disengagement with the job.

Spanky attempts to carry on with his job, but is grabbed by an enraged Phil. Mr. Curry enters and puts an end to the potential fight.

On hearing the news of Hector’s supposed sacking, Lucille criticises the Slab Boys, telling them:

You should all be leaving. You’re a bunch of good-for-nothing foul-mouthed pigs…in a foul smelling pig sty.

Lucille is quick to dismiss an offer to the ‘Staffie’ from Spanky, choosing instead to go with a mystery date from the slab room.

Phil then approaches her, hoping to secure a date for Hector. Lucille is confused and accepts the offer, thinking Phil is asking her to the dance. Upon discovering the truth she refuses to attend the dance with Hector in no uncertain terms:

I wouldn’t be seen dead with that smout at a dance.

Having assumed Hector is also to be fired, Phil and Spanky chip in money to support Hector and his mother until he finds a new job. When they present the gift to him they are shocked to discover that Hector has not been fired. He has been promoted to the position of designer, finally escaping the slab room. Hector enjoys the power of his new elevated position, finally putting Phil in his place:

sorry to hear you lost your job Phil...Not to worry...you’ll not find much difference now you’re ‘officially’ out of work.

As Phil and Spanky struggle to process the news of Hector’s promotion, Alan enters to inform Phil that the Art School have called and he has been unsuccessful in gaining a place. Adding salt to the wounds, Alan then finalises the arrangements for his date with Lucille, who will be joining him at the staff dance. Lucille confirms that Alan is able to borrow his dad’s MG before agreeing, showing the value of luxury commodities in securing the lifestyle desired by the Slab Boys.

The play ends with the news that Phil’s mother has been found and the revelation that Mr. Curry had attempted to defend Phil’s job. Spanky returns to the grind of the slab room, accepting of his role as a Slab Boy and willing to graft in the humdrum of his working class life.

Having lost his job, his place at Art School and having his mother go missing in a very short space of time, Phil relies on humour to see him through. His closing speech begins with a parody of an upper class gent commenting on how his day has played out, but takes a more honest and self-reflective tone towards then end:

Yes. Gosh, and All Serene, what a bally of a day. Started off pleasantly enough...one’s mater off for a few days in the country...

Phil’s closing line indicates that he has not lost his hope of escape from his humdrum existence as he declares Giotto was a Slab Boy! before cartwheeling out of the slab room and off the stage in a celebration of being alive - just as he had witnessed the girl cartwheel at the convalescent home in his childhood.