Kamikaze is a narrative poem. It begins as a kind of report, summarising another conversation or an overheard story told by someone else. Sections of the poem are presented in italics as first-person narrative, where the storyteller speaks directly for herself. This has the effect of heightening the sense of sadness she feels.

Kamikaze is written in seven, six-line stanzas. The poem does not rhyme and has no regular rhythmic pattern, though most lines have three or four stresses. This style, together with the regular stanza structure, allows the story to be told simply, letting the tragedy and emotion shine through, but allowing readers to make up their own minds about events in the poem.

One notable feature of the poem's structure is that it is composed of only three sentences and contains only three full-stops, perhaps reflecting the idea of a story being told orally. The first sentence runs over five stanzas, as we are told about what the pilot can see from the cockpit. We are therefore given a lot of detail, allowing us to imagine more exactly the circumstances of the pilot's difficult decision.

The second sentence marks a shift in time and in speaker. The reader is presented with information directly from the daughter, speaking in her own words. Until this point, her story was re-told in third-person narrative, creating a distancing effect. Now, the reader is suddenly brought close to someone with a direct interest in the story she tells, speaking at a much later time.

The new sentence contains another surprise. It is only now that the reader learns the kamikaze pilot abandoned his mission and turned back. Placing this information at the point where the poem has a shift in time and speaker, gives the information more impact.

The final sentence is only three lines and reverts back to third person. It adds another twist, emphasising the fact that the pilot may have thought he would've been better off if he had died in the suicide mission.

Each change in speaker and each shift in time has a jarring and unsettling effect on the reader and perhaps expresses the turbulent, but repressed feelings of the daughter. 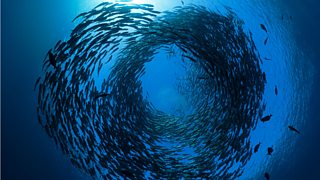 The language Garland chooses appears to be natural and every day. However this apparent ordinariness conceals some effective literary devices which invites the reader to think about what the pilot may have seen from his plane. It adds to the power of that moment, but also shows the daughter has thought about the same scene, time and time again.