The need to increase male suffrage 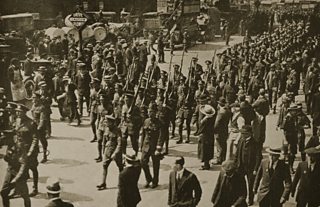 Politicians realised that returning soldiers should be able to vote

During the war there had been plans to change rules regarding male suffrage.

Many men returning home from war could have potentially found themselves disqualified from voting due to the residence qualifications. It was felt that these men should be entitled to vote after they had served their country.

it was suggested that some women might be included in the proposals.

For more than 50 years, an all-male parliament was reluctant to enfranchise women. By the end of the war, politicians had changed their minds for a number of reasons.

The balance of political power changed during the period of the war.

Other politicians who were in favour of female suffrage also became more influential at this time. This included Conservative MPs Arthur Balfour and Andrew Bonar Law.

It has been argued that the war provided a convenient excuse for MPs, who had been hostile to votes for women, to change their minds if they thought their position was in danger. Women's war work was a convenient pretext for them to alter their position in favour of women's suffrage.

After the war, even Asquith expressed the view that women had "earned" the right to vote.