Men Should Weep is set in Glasgow’s East End in the 1930s. This was a time of political upheaval and poverty for many. The play gives us in insight into the effects of the Depression, portraying those who had to carry on with their lives amidst such deprived conditions. 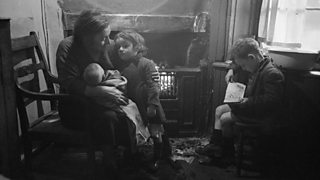 A family from the Gorbals

Families had to share cramped living spaces with poor sanitation, and disease was rife.

With no NHS in operation, people had to buy medicines they could ill afford, so often cases such as Bertie’s were left unchecked until they became very severe – hence the suddenness of Maggie not being allowed to take Bertie home.

Although some of the results of poor conditions depicted, such as prevalent TB, are specific to the time there are parallels that can be drawn with modern life. 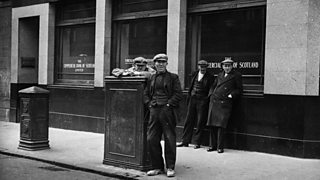 The depression made getting a job very hard in the 1930s

Poverty is a major concern today, and many children still suffer as a result of living in poor, damp housing with little prospect of escape from such a situation. On this level, as well as many others, we can identify with the situation presented in the drama.

The play also gives us a window into 1930s Glasgow – a place with no computers, mobile phones or televisions.

Children played outside, women chatted, leaning out of the windows of tenements, listened to the wireless. For a treat they went into town to look at the shops on Sauchiehall Street. The men had to wait to see if there was any work and often ended up in the pub.