The procurement of raw materials and trading patterns

The slave trade was important in providing British industries with raw materials. These were turned into manufactured goods in Britain and then sold for large profits in Europe and in the colonies.

Plantation-grown goods such as rum, tobacco, coffee, sugar, molasses and cotton were bought from the profits of selling African slaves to the plantation owners and sold for a profit in Britain and Europe.

The most obvious and dramatic effects of the Atlantic slave trade were changes to the Atlantic coast ports of Bristol, Liverpool and Glasgow. 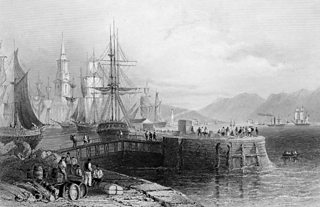 In 1700 Liverpool and Bristol were small towns. Glasgow’s population was around 12 000. This figure quadrupled in 100 years. These three ports had become important cities by 1800, largely as a result of trade in slaves or plantation-grown products:

The shipping industry grew enormously. Most of the British slaving ships were fitted in these ports. There was as much work involved in building, fitting and repairing the ships as in sailing them. Liverpool became a major shipbuilding city as a result of the slave trade.

Trade with the Caribbean employed half of Britain’s long distance ships. Many ship owners involved in the slave trade were also plantation owners. Often profits were spent by merchants around the ports.

Many plantation owners, especially in Scotland, built large town or country houses. Some endowed schools and other public buildings with money from plantation slavery. For example, in Bristol, the merchant Edward Colston, who made huge profits from the Triangular Trade, donated an estimated £100,000 to the city, including the foundation of a boys’ school named after him.