Ulster Plantations, Pilgrim Fathers and the migration of Huguenots

The 16th and 17th centuries were periods of tremendous change in Britain and Europe. Christianity was still the dominant intellectual force but it had been strongly influenced by the cultural Renaissance of the 15th century. The intellectual developments of the Scientific Revolution in the 17th century also played a part in instigating change throughout Europe.

The Christian Church became divided into Catholic and Protestant through a movement called the Reformation. These changes produced a number of situations where groups of people decided to migrate because of their religion.

Ulster Plantations and migration to Ireland

In the 16th century, England became a Protestant country, but this change did not happen in Ireland.

After this war, in 1607 during the reign of King James I of Britain, a plan was devised to settle Protestants in Ulster, taking the lands of a group of Ulster Catholic nobles who had fled the country.

The majority of the new Protestant settlers came from Scotland, and the idea was that they would not allow Catholics to stay on their land or work for them, so that the whole area became Protestant. Protestant church ministers migrated to Ulster to convert the native Irish to the Protestant faith. King James was clear about the religious purpose of the migration.

To King James the Plantation of Ulster would be a civilising enterprise that would:

Establish the true religion of Christ among men almost lost in superstition.Charter of King James to the town of Coleraine, 1613

In the end the new Protestant Ulster people did not drive the native Catholics away, and they ended up living alongside each other, although the Catholics were not as privileged as they had previously been.

Pilgrim Fathers and migration to America

Some Protestants in England, known as Puritans, thought that the new Church needed to be stricter and plainer to keep it as far away as possible from the old Catholic traditions. A particular group of Puritans decided that England would never give them the chance to follow their religion in the way they wanted, so they migrated from England. They were separatists and would later be called pilgrims.

Pilgrims migrated to the city of Leiden in the Netherlands, where they would not have to obey the Church of England. As the years passed, the separatists became concerned that they would lose their identity as English if they remained in Dutch society, and so they decided to migrate to the Americas and set up their own colony.

Migration two: 1620 – from the Netherlands to the Americas on the Mayflower 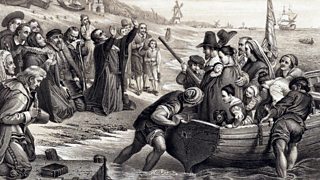 The Pilgrim Fathers, members of English Separatist Church sect of Puritans, leaving Delft Haven on their voyage to America July 1620

Pilgrims migrated to the colony of New Plymouth, deliberately trying to settle far away from the colony in Virginia. This was because the Virginia colony was connected to the English establishment and the Pilgrims were concerned that they might try to control their religious practice. They sailed much further north and came to the area around Cape Cod and what was to become Massachusetts and New England.

Liberty and the Pilgrims

The Pilgrims were not in favour of the new colonists having complete liberty and freedom, because they were worried that some of the people on the voyage who were not Pilgrims would set up their own religious practice. So, before they got off the boat, the Pilgrims signed a ‘Mayflower Compact’ to set up laws for the colony unto which we promise all due submission and obedience. The compact did not mention liberty or rights.

When they landed and set up their colony they immediately had contact with the native Americans. Initially the Pilgrims and the natives were friendly and supported each other, including helping the settlers to grow corn. However, some of the native tribes fought against the new settlers when they expanded into more of the native lands. 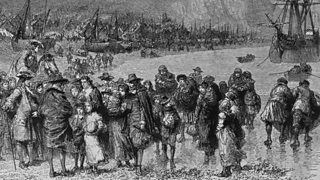 French Protestant Huguenot refugees arriving on the English coast at Dover in Kent, 1685

In France the Reformation had caused a lot of divisions through the 16th and 17th centuries. Although the French monarchy and state was Catholic, there were many Protestants in France, called Huguenots.

During the late 16th century there was a long period of religious civil war, which ended in 1598 when France agreed to tolerate the Huguenots under a new law called the Edict of Nantes. However, in 1685 the French king Louis XIV decided to make Protestantism illegal in France.

As a result of this religious persecution and suffering, thousands of Huguenots left France and migrated to Britain and other Protestant countries.

The Huguenots arrive in Sussex