The most commonly used measurement of temperature is the Celsius scale. The units of this scale are degrees Celsius (°C). This scale was designed to reference the freezing point (0°C) and the boiling point (100°C) of water.

Many scientists use the Kelvin scale instead. Kelvin is a better scale to use in space where there is no water.

Kelvin begins at absolute zero and so there are no minus numbers in the Kelvin scale, which makes calculations simpler. The units are kelvin (K). An increase in one degree Celsius is the same as one kelvin.

Conversion between the scales:

To be able to measure temperature easily we require fixed points. Two common fixed points are the melting and boiling points of water. These are 0°C and 100°C respectively.

Thermometers measure temperature. The liquid (usually mercury or coloured alcohol) expands when heated which means that it rises up the glass to show a higher temperature. 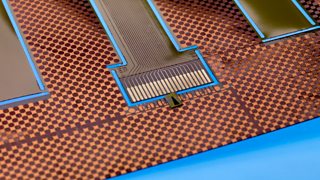 Close-up of a thermocouple component

A thermocouple is used to measure very high temperatures or those that change quickly. Thermocouples contain two different metals. A voltage is produced where these metals meet inside the thermocouple. This voltage is directly related to temperature.