Every news outlet chooses stories that suit its target audience.

For example, a weekly local newspaper will focus on stories that are relevant to its local audience and will not include international stories.

If you consume news from a variety of different media, you will notice that same story can be told in lots of different ways, even if the same key ingredients – the facts – are the same.

Some stories have a broad reach and are covered by different types of media. A national newspaper may include the same story as a local one, if it is a big or important story, but it will broaden the angle to cater to its national, UK-wide, audience.

Or a local newspaper may take a national story and put it in a local context.

For example, a national story about NHS funding cuts will often be covered by local newspapers in terms of what it will mean for specific local or regional hospitals. 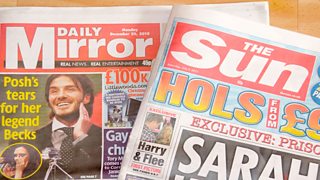 Tabloid newspapers are sometimes called 'Red Tops' because of their red masthead.

Tabloid newspapers are different in content, style and language from quality newspapers (sometimes known as ‘broadsheets’).

What is a news angle?

An angle is the lens through which the subject matter is viewed.

Different news outlets may choose different angles to report on the same story. Some media present stories from an angle that they believe will appeal to their target audience.

For example, some newspapers support certain political parties or political values, and they may choose to foreground that political angle.

However, all good news stories provide some balance and look at a subject from different points of view.