In the first stanza, Duffy emphasises that the decision to move affected her entire family unit through the first person plural in the opening line: We came from our own country.

Similarly, the deliberate assonance of our own reinforces her definite sense of belonging to and possession of a particular place. 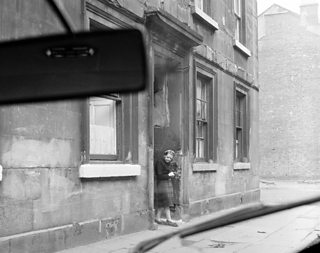 A car driving through the Gorbals area of Glasgow in 1963

She describes the interior of the train as a red room which fell through the fields.

The colour red has connotations of passion or anger, perhaps reflecting her own feelings about being forced to leave the city of her birth and early childhood.

At the same time, the word choice and alliteration of fell and fields emphasises her feelings of impotence and lack of control in the making of this important decision.

She recalls hearing our mother singing/our father’s name to the turn of the wheels.

The optimistic mood of her mother acts as a distinct contrast to the obvious negativity of Duffy herself and is also slightly ambiguous - the reader is unsure whether their father is in the train carriage with them or if they are travelling to meet him at their destination.

She also remembers the behaviour of her younger brothers whose emotions seem to reflect her own: they are crying and one of them is bawling Home, Home.

The repetition and capitalisation of the word home reinforces the misery and overwhelming sense of loss and separation that she associates with this time.

Duffy uses personification in the line the miles rushed back to the city to emphasise her own desire to return to Glasgow, to reverse this trip and reinhabit the street, the house, the vacant rooms/where we didn’t live any more.

Again, the first person plural of we emphasises that, even though this poem is written from her own perspective, she very clearly considers the impact of the move not just on her but on the rest of her family. In contrast to her younger siblings, whose protestations are loud and vocal, Duffy is silent as she stared/ at the eyes of a blind toy.

The word choice of blind again exposes her uncertainty and anxiety as they head towards something unknown and unfamiliar.