Land issues in the Highlands and Islands

The Crofters Act of 1886 ended the Highland Clearances and meant that crofters could not be suddenly evicted from land they rented from the landowner. However, poverty and shortage of good quality land meant that protests and discontent continued in the Highlands.

When the war ended, many soldiers from the Highlands and Islands returned home with the firm belief that they had been promised land as a reward for fighting for their country. When this land was not given to them fast enough, many began land raids.

Land raids involved men occupying land they believed they had a right to work on, without the current landowner’s permission. Returning soldiers simply ‘squatted’ on land throughout the Highlands.

Some cited an old law which they claimed gave them the right to the land if they could build a wooden shelter and a hearth on which they could make a fire.

In response, the government passed the Land Settlement Act of 1919. It stated that land would be made available for men who had served in the war.

This left the problem of how to obtain enough land to provide. For the Act to be successful, land would have to be purchased from the current owners but the government could not afford to do this.

By the end of the 1920s the problem of land ownership, overcrowding and poverty had still not been resolved in the Highlands. Many saw emigration as the only option.

In the period between the two World Wars, Scotland had the highest emigration rate of any European country. Many Scots saw emigration as an escape from unemployment and poverty in the Highlands, and also from the depressed industrial areas of central Scotland. 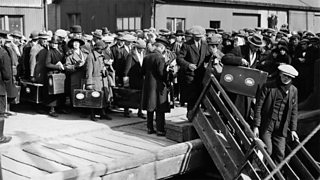 Emigrants went to Canada from Scotland

It was intended to boost the rural populations of Canada and other parts of the British Empire. Subsidies were paid to emigrants who agreed to work the land for a certain period of time.

The 1931 census showed a drop in Scotland's population for the first time since official records began in 1801.