The Battle of Loos 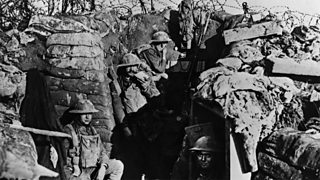 The Battle of Loos started in September 1915. It was the first time Lord Kitchener, Secretary of State for War, used armies of volunteers in a major attack - around 30,000 Scots took part in the Battle. It was also the first time the British Army used poison gas as a weapon.

General Douglas Haig, in charge of the attack, had serious worries. He knew that the attacking soldiers had almost no cover and so would be in full view of the German machine gunners.

Haig planned to release chlorine gas from canisters but the success of the attack depended on a steady wind blowing the gas towards the Germans.

When the attack began some reports suggested that the wind had changed, blowing the gas back towards the attacking Scots. In many parts of the battlefield the Germans were pushed back, but casualties were very high. Reinforcements were needed but they were slow to arrive.

By the time the attack was resumed, the Germans had also been reinforced. The British attack had lost the element of surprise and had no gas cover, so the German machine guns cut down the men from Kitchener's army in their thousands.

Battalions from every Scottish regiment fought in the Battle of Loos and suffered huge numbers of casualties. Of the 21,000 killed, over 7,000 were Scottish soldiers. Almost every town and village in Scotland was affected by the losses at Loos.