Before 1997, Hong Kong was a British colony. When China resumed control of wealthy Hong Kong, it was agreed to continue the greater freedoms the people of Hong Kong enjoyed compared to mainland Chinese.

Having one part of the country where there is significantly greater political freedom represents a challenge to the Chinese authorities. In Hong Kong there is a freer press, there are opposition parties and political protest is legal. Half of the government is non-communist although the Chief Executive is approved by the CPC (currently Carrie Lam).

The CPC describes its policy towards Hong Kong as 'One Country, Two Systems'. Most of the political freedoms agreed in 1997 are still in place but the Chinese authorities remain concerned about continued demands for full political freedom.

In August 2014 the Chinese government in Beijing ruled that candidates for the election of a new chief executive in 2017 would be from a list pre-approved by the CPC. 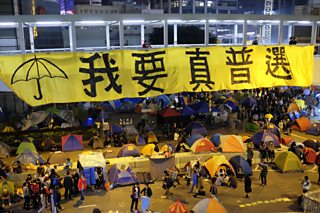 This led to widespread protests in Hong Kong. Led by activist groups including Occupy Central, Scholarism, and the Hong Kong Federation of Students, tens of thousands of people took to the streets in protest. Many carried umbrellas as a sign of passive, non-violent resistance and as a result the protests became known as the 'Umbrella Revolution'.

After failed talks with Chinese authorities, some violent clashes and growing opposition from local people fed up with the disruption, the protest camps were cleared by mid-December. However some protesters have said they will continue campaigning for democracy.

In April 2019, the Hong Kong executive introduced plans to change legislation that would have allowed Hong Kong citizens charged with crimes to be extradited to China to stand trial. Critics of the plan feared that these powers would be used to intimidate or arrest protesters and pro-democracy activists. 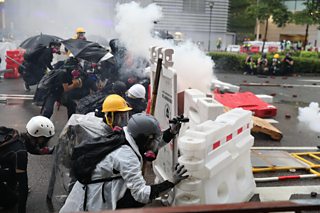 Protesters in Hong Kong defend themselves against tear gas, 25 August 2019.

On 9 June 2019, an estimated one million people marched in protest at the proposed extradition bill. The protests continued until, on 15 June, the leader of the Hong Kong executive, Carrie Lam, announced that the bill would be indefinitely delayed.

Rather than calming tensions, the protests grew larger. On 16 June, an estimated two million people took to the streets to demand that the bill be permanently removed and that Carrie Lam resign.

The nature and demands of the protests changed. The protests became less about the extradition bill and more about defending Hong Kong’s limited but cherished political freedoms and rights.

The protests became marked by instances of violence with the police regularly using rubber bullets and tear gas to disperse large crowds. On 12 August, protesters closed down Hong Kong’s airport as the protest entered its tenth week. On 4 September, the extradition bill was withdrawn but the protests continued.

On 24 November, the Hong Kong District Council elections were held and pro-democracy campaigners won 17 of the 18 council seats – a result that emboldened the protesters and embarrassed the Hong Kong and Beijing governments.