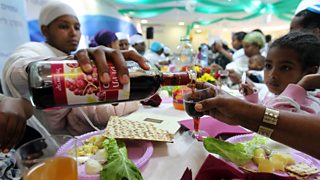 Pesach, sometimes called Passover, is one of the most important Jewish festivals.

Jews remember how the Israelites left slavery behind them when Moses led them out of Egypt more than 3000 years ago.

Moses went to see the Pharaoh many times, but each time he refused to release the Israelites. Moses warned the Pharaoh that God would send ten plagues on Egypt if the Pharaoh did not let them go.

The ten plagues were: water turned into blood, frogs, gnats, flies, blight of the livestock, boils, hail, locusts, darkness and the death of each first-born child.

Symbolism and features of worship for Pesach

Matzah - the Pharaoh gave in and told Moses and the Israelites to go at once. They left in such a rush that their bread did not have time to rise. This is why, before Passover, Jewish people eat unleavened bread called Matzah. In many Jewish homes, children enjoy taking part in a ritual search for any specks of leaven left behind.

Seder plate - on the first night of Pesach, a special service called a Seder takes place over a family meal in the home. The Seder plate consists of:

On the table, there are several Matzot (plural of Matzah) on top of each other. At the start of the Seder, the middle Matzah is broken and the largest piece is hidden. During the Seder, the children hunt for it. The one who finds it receives a small prize.

Wine - four small glasses of wine represent the four expressions of freedom, symbolising the Israelites being brought out of slavery. The wine symbolises joy and happiness. An extra cup of wine is placed on the table and the door is left open for the prophet Elijah. Jews believe that Elijah will reappear to announce the coming of the Messiah and will do so at Pesach.

Cushion - during the evening, the story of how the Israelites fled from Egypt is retold. Everyone at the Seder has a cushion to lean on. This is because in the ancient past people reclined on cushions during meals. The custom is meant to remind Jews that they are now free people and no longer slaves.

Exodus - the Passover Haggadah tells the story of the Exodus from Egypt. Everyone is to imagine him or herself as if they were redeemed from Egypt themselves. The evening, which includes stories and songs, is a mixture of joy and sadness. Jews do not forget that they were once slaves, but they also celebrate their freedom.