Reality intervenes in the next two stanzas. The use of ‘native’ here recalls the sound of ‘fatal’ from the previous stanza, which might suggest that our very origins are bound up with our fate – we are doomed from the beginning.

Each moment that moves us away from the illusion of film is charted in a list using the repetition of "so when", "or when" to begin the lines. This suggests that there are a number of possibilities for mistakes and things that can distract us from the story that is being told, or that we are telling. The "boom" dipping "into view" refers to the sound equipment of a film set, but ‘boom’ also reminds us of the "thunderous downpour" of stanza two.

We are told that the actress's speech "starts to betray/its adaptation from the play"; in the word choice of ‘betray’ Paterson uses the language of morality once again.

Both the actor’s “native twang” and the speech that is adapted “from the play” make clear the idea of pretend, of people acting as someone they are not or saying words that aren’t theirs. This idea of playing a role or performing line again suggest that people go through life following a preplanned script.

I think to when we opened cold/ on a starlit gutter

The expression "opened cold" used at the beginning of stanza six is a film technique where you jump straight in before any title sequence. We might read this as a kind of oxymoron as ‘opened’ has connotations of beginnings while ‘cold’ suggests death and the end of things. Again this relates to fallen man.

The "starlit gutter" could recall Oscar Wilde’s ‘We are all in the gutter, but some of us are looking at the stars.’ Perhaps that’s what the role of cinema is: to make the ‘gutter’ of reality ‘starlit’ with wonder and imagination. It could link back to the woman’s “upturned face”. 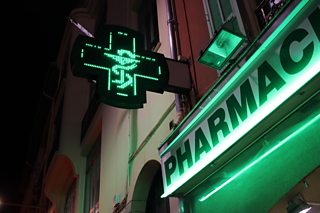 Paterson plays again with the ordinary versus extraordinary theme. What looks like gold is just the lit sign of a shop. ‘Drugstore’ is also using the American register, the language of Hollywood. The "blazing line" conveys its vividness but it also connotes a sense of fire and heat, as if the next lines come from some sort of elemental source.