I love all films that start with rain

The poem begins with this positive declaration which immediately links the rain falling in this poem to rain used to create effects in the movies. This is not specific rain of a particular location, but rain that is universal, watched by millions to create emotional impact.

The speaker repeats the word "rain" immediately after the colon, which reminds the reader of ‘Rain, rain go away, come again another day’ – a rhyme from childhood – which adds to the melodramatic and almost playful mood Paterson is establishing.

What follows is a list of scenes involving rain that are immediate and suggest the visual power of cinema. 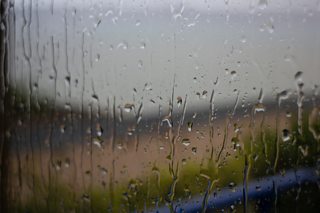 Paterson describes the rain as "braiding a windowpane" which is a very visual metaphor.

The rain "braiding a windowpane" is a very visual metaphor, as it likens the rivulets of water to strands of hair overlapping and running in together as it would in a plait. This is effective because it anticipates the image of the woman in the next lines.

We are then presented with the rain "darkening a hung-out dress" another vivid image which perhaps introduces the idea of sin with the connotations of "darkening".

"Her upturned face" suggests the figure is expectant, looking to the heavens for solace or forgiveness.

one big thunderous downpour/ right through the empty script and score

Suddenly we have sound. This is linked to the screenplay of a film through the mention of script and score. We get the idea of something that has been planned and created to have a dramatic impact. The addition of "big" here is unnecessary and therefore adds to the melodrama.

We are also reminded of the rain before the great flood (which comes at the end of the poem). Paterson repeats "before" to intensify the rhythm but also to emphasise the importance of "before" – a time when we were innocent, without "blame". In this light, "before the act" takes on a double meaning here, as it connotes an ‘act’ in a play or film as well as our first sinful ‘act’.

This creates the idea of rain as something eternal, something that was there before humankind.