In the 1840s attitudes began to change. Edwin Chadwick was a civil servant employed by the Poor Law Commission. He was asked by parliament to investigate living conditions in Britain.

His 1842 Report on the Sanitary Conditions of the Labouring Population concluded that much poverty and ill-health was caused by the terrible living conditions and not by idleness. It shocked public opinion.

Statistics in the report showed just how unhealthy industrial towns and cities were, even for the wealthier inhabitants.

For a few years little happened. Chadwick’s report was strongly opposed by many MPs who were nicknamed the Dirty Party. Chadwick’s recommendations meant that councils would have to increase the rates and this would be unpopular with the better-off citizens. It was the cholera epidemic of 1848 which led to a change of mind by Government.

The 1848 Public Health Act set up the Board of Health - the first time that Government had legislated on health issues. Local authorities were given the power to appoint an officer of health, who had to be a legally qualified medical practitioner, and to improve sanitation in their area, eg collect rubbish, build sewers and provide a clean water supply.

While the Public Health Act of 1848 was a great improvement on what had existed before the system was not compulsory. The board could not force councils to act on its recommendations.

In 1854, cholera struck again. In London, Dr John Snow studied the spread of cholera in the Broad Street area. He noticed that the victims had all drank water from the pump in the street. He persuaded local officials to stop people using the pump and the number of cases fell rapidly.

By observation Snow had shown the link between bad water and cholera – the Broad Street water had been pumped from the Thames. If people had clean water then disease would be reduced. 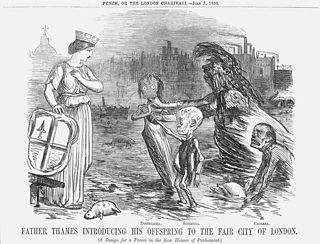 A cartoon from the time of the Great Stink of 1858 entitled Father Thames introducing his children to the fair city of London. His three ‘children’ are diphtheria, scrofula and cholera

In 1858, London was affected by the Great Stink. Soon after work began on the London sewage system. By the time it was completed, 1, 300 miles of pipes had been laid, under the direction of Joseph Bazalgette, the chief engineer. However, relatively few councils followed London’s example. By 1872, only 50 councils had Medical Officers of Health. The huge cost of carrying out improvements was the biggest obstacle.

Pressure began to mount on Government. Finally the Public Health Act of 1875, forced councils to carry out improvements.

These included the provision of clean water, proper drainage and sewage systems and the appointment of a Medical Officer of Health in every area.

During the 1870s, in fact, a series of new laws led to improvements in public health and hygiene.