There is a change in pace from the longer sentences in the first stanza by using three exclamations in the depiction of the objects the trio carry, Orphean sprig! Melting baby! Warm chihuahua!. The use of caesura a deliberate break in the line through the exclamation marks – helps to focus our attention on each of the objects.

The use of the three adjectives, Orphean, melting, and warm, is also significant. According to Greek Mythology, Orpheus had the power to bring objects to life through his music while melting and warm help to convey the joy and happiness emanating from the group.

Despite the religious imagery presented earlier, the speaker makes it clear that this is a secular poem in the line Whether Christ is born or not born. The idea presented is that religious faith is no more relevant or important than the feeling of goodwill and happiness that surrounds this trio, and that the qualities of generosity, compassion and kindness are not exclusive to religion but inherent in all of us regardless of faith or belief.

Now, though, the speaker moves on to a deeper meditation, suggesting that when confronted with this trio, the sorrows and sadness of life, the vale of tears is effectively rendered powerless. 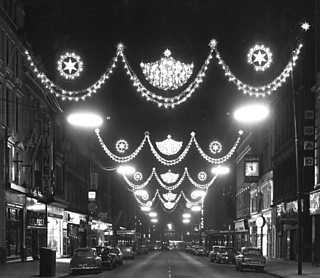 This expression is a biblical phrase, which is basically a metaphor for life’s problems and again alludes to religion. The idea implied is that the friendship and camaraderie of this group is just as fulfilling and enriching as any religious faith and equally able to offer protection from life’s hardships.

The speaker then moves on to explain how fate is no match for the joy and goodwill symbolised by the group. Fate is personified, becoming a foe which abdicates/under the Christmas lights.

Fate, the perils and difficulties of life, is apparently forced into submission by the trio. We get the impression of the trio possessing happiness and enjoyment which counteracts and provides an antidote to the more difficult, negative aspects of life.