England became part of a large continental European empire during the reign of King Henry II (1154-1189). Henry’s Angevin Empire stretched from Hadrian’s Wall in Scotland to the Pyrenees Mountains between modern France and Spain. The territories in France were constantly under threat from the King of France and land was gradually lost by Henry’s sons; King Richard I and especially King John.

In 1204 King John’s armies were defeated in Normandy and that large territory which had been a part of the Kingdom of England since 1066 was lost. It would take over a hundred years before English armies began to regain the territories in France that they claimed as part of their kingdom.

In 1337 the French king confiscated most of the remaining English territory in France. The English king - Edward III - didn’t accept this, and in fact declared himself to be the rightful king of all of France, because he was the previous French king’s nephew. In 1346 King Edward III invaded France, marking the start of the fighting in the Hundred Years’ War. 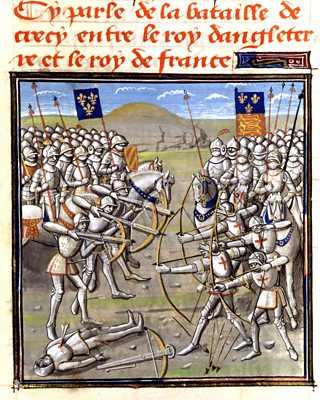 The Battle of Crecy

The Battle of Crecy was a major English victory and the tactics used at Crecy would be used throughout the Hundred Years’ War, most famously at Poitiers in 1346 and Agincourt in 1415.

The English victory at Agincourt against a numerically superior French army was a significant turning point in the Hundred Years’ War; the French had around 24,000 troops compared to England’s 6,000. England was once again a major power in France.

King Charles VII’s growing support in France increased as he allowed a peasant girl, Joan of Arc, who claimed to have visions from God, to successfully lead his army during a siege against the English and their French allies - the Burgundians.

The Burgundians were convinced to abandon their alliance with the English and joined King Charles VII instead. By 1453 the English had been forced out of their last major strongholds in southwest France and The Hundred Years’ War was over.

A strong sense of English identity developed during the course of the Hundred Years’ War. Initially this was confined to England where the victories of Crecy, Poitiers and Agincourt were celebrated. Later, the sense of Englishness helped to maintain unity in France against the advances of the combined forces of King Charles VII and the Burgundians.

In 1558, Calais, England’s last possession in France, was captured. This ended 500 years of English presence in France. European powers, such as Spain and Portugal, were growing very wealthy exploiting the resources of the newly discovered Americas during the early 16th century and England shifted its focus west, across the Atlantic to build a new empire in North America and the Caribbean.