Changing views of the war in the USA

Another major reason why the USA could not win the war was the lack of support at home from the American public.

This was the first televised war. Images of dead civilians and wounded soldiers were seen on the TV and in newspapers - many Americans were horrified and turned against the war.

Opposition to support for the South Vietnamese Government

The South Vietnamese Government, which the Americans were committed to defending was revealed as corrupt and anti–democratic.

Many Americans questioned how the American Government could justify standing up for this oppressive regime. The USA was meant to fight to protect freedom and democracy.

It became clear that the Vietnamese peasants did not welcome American troops. Many Americans questioned why their country was involved if the local population did not want them there.

Opposition to the 'Draft'

The 'Draft' was the conscription of American men into the US army and lasted from 1954-1975.

Many middle-class Americans opposed the war because, by 1967, the death rate had increased to 160 per week.

There was opposition to the war from civil rights activists who were fighting for more rights for African-Americans in the USA.

Many African-Americans were drafted and because they were new recruits, they were often given the worst postings and assignments. Muhammad Ali had his boxing title revoked for refusing to fight in the war.

The main opposition came from students. In the 1960s, protest movements began in California but spread to all the major cities and universities across the USA by 1968.

On 4 May 1970 four peaceful student demonstrators at Kent State University in Ohio were shot dead by Ohio National Guardsmen during a noon-time campus anti-war rally. 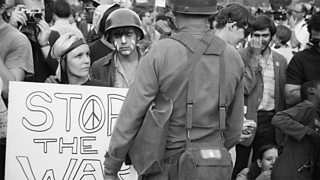 Many believed that war was morally wrong. There were mass protests across the USA, including in Washington in December 1969. Singers wrote anti-war songs and songs that criticised the Vietnam War itself.

The American Government spent vast amounts of money on the war that could have been spent on domestic problems.

Some politicians who had supported the war to begin with, such as Robert McNamara began to turn against American involvement.

The end of the war in Vietnam 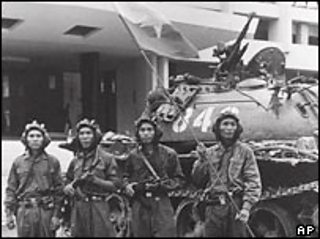 The resignation of President Nixon also weakened US enthusiasm for involvement in Vietnam.

In 1975, the North Vietnamese launched a major offensive and over-ran a series of South Vietnamese strongholds . In May 1975 communist forces took Saigon.

In 1976 the two halves of Vietnam were united in a single Socialist Republic. The Vietnam War was the greatest struggle of the Cold War era and the only major military defeat in United States history.