Drumlins are oval hills which form in groups called swarms. The unsorted till appears moulded by ice to form a blunt end with a more streamlined, gentler lee slope.

Moraines are mounds of poorly sorted till where rock debris has been dumped by melting ice or pushed by moving ice. 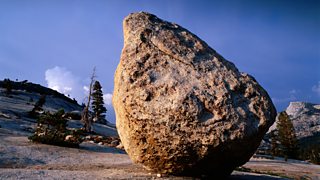 The different types of moraine include terminal moraine, which marks the end of an ice sheet or valley glacier, and lateral moraine, which forms at the edge of a glacier at the valley side.

Erratics are boulders carried by ice, often for many kilometres, and deposited in areas of completely different rock type.

Outwash plains are areas of sorted sand and gravel deposited at the mouth of meltwater rivers which were often braided.

Kettle holes may be found if a block of 'dead ice' is partially buried by fluvio-glacial deposits. When the ice melts a hole is left which may fill with water to form a kettle hole lake.

Eskers are long, winding ridges of layered sand and gravel similar to railway embankments. They are formed inside the ice, in tunnels in which meltwater streams flowed.

Kame terraces are gentler slopes of layered sand and gravel at the side of valleys. They were formed at the edge of the glacier and valley side where meltwater forms on the surface.

Terminal moraines or end moraines as they are often referred to are ridges of unsorted material at the snout of the glacier. They mark the furthest point reached by the ice sheet or glacier.

Terminal moraines form when the ice melts and deposits all the moraine it was transporting at the front of the glacier. Glaciers can transport huge amounts of material including rocks, stones and smaller particles. It takes great force for a glacier to be able to transport this material.

Glaciers carry moraine at the sides of the glacier, called lateral moraine, in the middle of the glacier called medial moraine, and at the base of the ice called ground moraine. Therefore, terminal moraines are completely unsorted, and may extend for many kilometers.

The video below discusses evidence of glaciation in Scotland