U-shaped valleys have steep sides and a wide, flat floor. They are usually straight and deep.

They are formed in river valleys which, during the ice age, have been filled by a large glacier. These glaciers have deepened, straightened and widened the valley by plucking and abrasion.

A hanging valley is a smaller side valley left 'hanging' above the main U-shaped valley formed by a tributary glacier.

A waterfall can often be seen. During glaciation the smaller side valley contains less ice than the main glacial valley, which is why it is not as deeply eroded.

Truncated spurs are rounded areas of land which have been cut off. A spur is a narrow neck of highland which extends into a river valley. It often forms the divide between two tributaries. They are often rounded at the top but steep at the bottom. They are formed when glaciers move through the main valley and cut off spurs.

A ribbon lake is a large, narrow lake occupying a U-shaped valley. It forms in a hollow when a glacier has more deeply eroded less resistant rock or it may fill up a valley behind a wall of moraine across the valley.

Misfit streams and rivers meander through the flat, wide U-shaped floor. They do not erode the valley, as they form after glaciation has carved out the U-shape.

When temperatures rise again, during the day, the ice melts, releasing the pressure on the rocks. This continuous freezing and thawing process is known as freeze-thaw. It causes the rocks to become very weak, cracks widen and pieces of rock break off.

During glaciation the ice moves down the V-shaped valley due to its weight and gravity. It tears away huge rocks from the sides and base of the valley.

The glacier freezes onto the surrounding rocks previously weakened by freeze-thaw, by a process known as plucking. Thus changing the valley into a U-shape by steepening them. The erosive power of the glacier over deepens the valley floor. The rocks that have become embedded within the glacier scrape against the valley sides and base, and smoothen it like sandpaper. This is known as abrasion.

The valley is now U-shaped in cross section, with very steep sidewalls, and a flat base. After glaciation, freeze-thaw action continues with the warming and cooling of temperatures, as well as other agents of weathering. This causes rocks to weaken and fall to the valley floor as scree.

The original river channel has altered and so when rivers take over after glaciation, they meander across the enlarged valley floor. These are known as mis-fit streams. 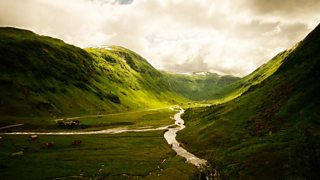