The use of caesura – a pause that breaks up a line of verse – in the opening of this stanza illustrates the immediate, inescapable simplicity of the situation - Ward 7.

We have followed the speaker’s progress along the corridors of the hospital and this ward is his destination.

It is significant - the short sentence punctuates the stark reality of the situation. From here, it will be impossible to escape the spectre of death.

This is a turning point in the poem as now he must confront the reality of the situation he has been so desperate to avoid.

While the walls of the hospital corridor were colourful, MacCaig uses a metaphor to describe the patient’s white cave of forgetfulness.

This reveals the isolation and lack of any sensory awareness in her current state. It also emphasises how distant from the speaker she now is.

The patient’s hand seems fragile, MacCaig’s word choice detailing how it is withered and trembles.

By comparing her body to a dying flower he conveys how brittle and frail she has become, as well as hinting at her past vitality.

However, there is also an implicit hope here. Just as flowers and plants die and go to seed, so too there is the possibility for regrowth and new life. Again, the speaker’s desire to believe in some kind of afterlife is revealed.

The use of the pronoun its in its stalk instead of referring to her arm serves to dehumanise the woman. It suggests that her body is merely an empty shell - that the person she once was has gone. 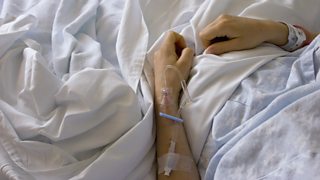 This idea of emptiness and hollowness links back to the cave imagery from earlier in the stanza.

One of the most memorable images from Visiting Hour is the description of the needle in the patient’s arm as a glass fang.

The comparison of the intravenous drip to a vampire is shocking. It shows how frightening the speaker finds the medical equipment attached to the patient.

However, unlike a vampire’s fang which is designed to drain blood, this needle is not guzzling but giving.

Nevertheless, the harsh sound of the alliterative g conveys a sense of bitterness. The speaker feels the medication is both intrusive and ineffective.