Détente and the economic cost of the arms race

The policy of détente refers to the time in the 1960s-1970s when the two superpowers eased tension and tried to cooperate to avoid conflict.

Détente helped the superpowers reduce spending on the arms race and fighting the Cold War. Instead they could focus on problems in their own respective countries.

Financial issues in the USA 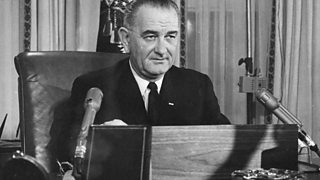 The USA had suffered from inflation and its commitment to the Vietnam War. By the end of the war, America had spent $120 billion on trying to prop up the South Vietnamese regime.

The conflict meant that they could not afford to assign troops or money to other areas. Détente gave the Americans a chance to establish an exit strategy for Vietnam.

However, the USA was left reluctant to pursue other attempts to stem the spread of communism. This was largely due to the public’s resentment for the Vietnam War.

As a result of the arms race and Vietnam, President Johnson had not been able to fully implement The Great Society.This was a series of reforms aimed at eradicating poverty and racial injustice within the USA. Its failure had resulted in a great deal of unpopularity for Johnson. Urban riots had broken out in 1968 due to the significant social problems in the country.

Financial issues in the USSR

By the 1960s, the USSR was spending 20 per cent of its annual budget on defence. Its people were starving due to failing economic policies, especially those introduced by Khrushchev.

In the late 1950s and early 1960s, the Soviets had to import supplies from the West. Poor housing and standards of living were also a major issue.

Industry was underdeveloped in the Soviet Union - industrialisation had happened a century later than in the rest of Europe. The USSR was behind the USA in terms of production and in standards of working conditions. As a result, consumer goods widely available in the West were scarce in the Soviet Union.