In German, there is a clear structure to a sentence, so word order really matters.

In German, the verb is always the second idea in a sentence. But this does not necessarily mean that it is the second word.

In English, the verb as the second idea is only true in short, simple sentences with no additional information, eg:

I live in England.

Here 'live' is the second idea, but also the second word in this particular case.

If we add some more information to the start of the sentence, you can see how English and German differ. In the next example below, the extra phrase 'in winter' is just tacked on to the front and the word order for the rest of the sentence stays the same.

In the winter, I live in England.

In German, when an extra phrase is added to the front of a sentence, the verb still has to go second. So:

Im Winter wohne ich in England – In the winter, I live in England.

Look at these other examples of the verb in second place in German:

Meiner Meinung nach essen wir zu viel Fett. - In my opinion, we eat too much fat.

Look at these present tense examples where the first idea is in bold.

Can you identify the second idea - the verb - in the sentences?

Reorganise these sentences so that the verb is the second idea. Don't forget that it might not be the second word.

Once you are happy with the word order, translate the sentences into English. 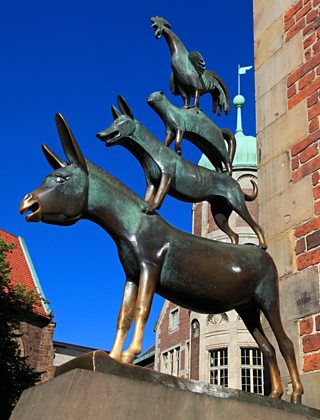 Order certainly matters when it comes to the famous bronze statue of The Town Musicians of Bremen – Die Bremer Stadtmusikanten – in the city of Bremen, north Germany.

The statue represents a fairy story by the Brothers Grimm about a donkey (ein Esel), a dog (ein Hund), a cat (eine Katze) and a cockerel (ein Hahn), who head to Bremen to become town musicians – Stadtmusikanten.

On the way to Bremen, the animals decide to spend the night in a forest, where they discover a cottage being used as a robbers' den. The animals decide to frighten the thieves by standing on each other's backs and making a huge noise. As the largest, the donkey stands at the bottom with the dog on his back. The cat stands on the dog's back with the cockerel perched on the very top. The robbers flee in terror at the din and the animals move into the cottage where they live happily ever after. Despite the name of the tale, the animals never actually reach Bremen.

A statue of the animals - in order - can also be found outside each of Germany's five veterinary schools, and features on the coat of arms of the city of Bremen.