The growth of civic and parish responsibilities

By 1500 most of the population still lived in rural communities or small towns. However, the feudal system was in decline and parishes were increasingly used as a way to organise and control local matters rather than the Lord of the Manor.

Although parishes were religious organisations, throughout the 16th century, Tudor Governments gave them increasing powers in local matters. For example, in 1555, parishes were responsible for the upkeep of nearby roads, whilst the 1601 Poor Relief Act (Poor Law) outlined the responsibility of the parish to look after its own poor. Also under the Act, parishioners were appointed by JPs to serve as overseers of the Poor Law for one year.

In the 16th and 17th centuries, individual towns and parishes took greater responsibility for combating crime and policing the nation.

Justice of the Peace (JP)

JPs had responsibility for law and order in each county. The post of JP started in medieval times, but became more important in Tudor times. They were unpaid and did the role mainly for prestige. JPs were usually landowners from the county who were appointed annually to the role. However, many did the job for years. The role included a lot of things that our local councils do nowadays, such as organising road and bridge repairs, checking weights and measures in shops, licensing ale houses, and supervising poor relief.

There were around 20 JPs per county. The JPs were also known as magistrates. They would hold petty sessions to deal with minor crimes such as petty theft and fighting. For more serious cases such as murder, assault or rioting, a larger number of JPs would meet four times per year at quarter sessions. The most serious cases, such as murder, witchcraft and rioting, would be passed on to the assize courts, where a judge and jury would pass judgement.

JPs led and organised the Parish Constables and the Town Watchmen.

The powers of JPs increased in 1554, after which time they could arrest a suspect on suspicion of a crime and interrogate them for three days.

Responsibility for the day to day maintenance of law and order still lay with local communities through the Parish Constable. The Parish, or 'Petty', Constable was appointed by the JP for a year. The post was unpaid and done in addition to the person’s usual day job. They were usually local tradesmen or farmers, which meant that communities were 'policing' themselves.

The Parish Constable was expected to perform all of the main duties associated with local policing.

Local people were duty bound to help the Constable if he requested it, keeping the community responsible for enforcing law and order. 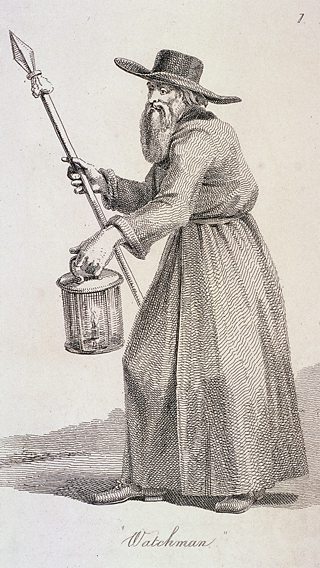 Watchmen, or Bellmen, had existed since the reign of Edward I. They were not paid, and all men in a town were expected to volunteer for this duty. They patrolled the streets of the largest towns on a nightly basis. Wealthier town dwellers would pay others to do their duty.

They became known as Charlies, or Charleys, after 1663 when Charles II set up a force of paid Watchmen to patrol the streets. They did not have a uniform but were identifiable by their heavy coat, lantern and bell.

Although the Charlies were low paid, and became a source of ridicule, the intervention of the monarch in policing and the payment of the Watchman marked a significant change away from communities policing themselves.

The Acts of Union (1536 and 1543) made English laws apply to the whole of Wales, with JPs appointed to administer the law as in England. Pre-existing Welsh laws, like those of Hywel Dda, were now abandoned. The Acts of Union also made English the language used in Welsh courts, and all public officers had to use English. These laws gave greater power to the Welsh gentry class, who now became JPs.