This stanza opens with the question the poem has been leading to: So who's the monster? By this stage it seems clear to the poet his initial, dismissive response to the shark as a brainless, inferior creature has been reversed. 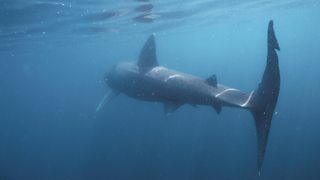 This magnificent, awesome creature is monstrous simply because of its relative size, but in the metaphorical sense it is clear the speaker now considers humanity to be the true monster.

The first line glides effortlessly into the second with a skilful piece of enjambment as we are told how he grew pale/For twenty seconds as the huge fish itself glides away. The sheer size of the creature is conveyed by a number of techniques.

There is the mention of twenty seconds being the time the shark takes to pass him by, and the repetition of sail after sail, referring to its fin and tail above the water. The metaphor comparing fin and tail to sails gives us the impression of vast surface areas and the shape is also nicely evoked.

There is a sequence of long vowels in sail, tall, slid away and finally tail - all of these effectively combine to suggest the gradual exit of this vast animal.

The speaker's view of the creature has also been displaced at the end of the poem. No longer is it the clumsy, bulky creature of the opening lines but something graceful and elegant. This reinforces the change in the speaker - just as he now has a different view of himself, so too his opinion about the shark has been altered.

The unanswered question at the end of this poem is typical of what is often described as MacCaig's metaphysical approach. His hair-raisingly close encounter with this monster of the deep has raised profound philosophical questions about our ethics and our place in the natural world. MacCaig avoids the temptation to conclude this meditation with an easy or glib answer, instead inviting his reader to draw their own conclusions.